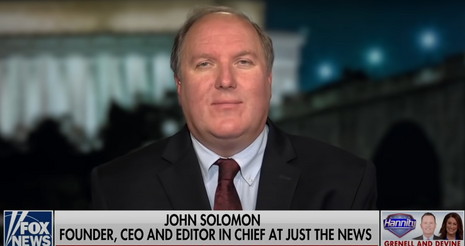 Just the News released a report Dec. 28 noting that Solomon was suspended from the leftist Big Tech platform “for sharing an article about the legal distinctions between Pfizer's fully approved and emergency use authorization (EUA) COVID-19 vaccines.” The distinction “could affect the legality of vaccine mandates.” Twitter slapped the article Solomon attempted to share with a “Warning: this link may be unsafe” label and propagandized that it “could lead to real-world harm.”

Perhaps Twitter likes vaccine mandates? “An immunologist who reviewed the article told Just the News he saw nothing wrong with it factually,” according to the report. Twitter had reportedly "limited" Solomon's account temporarily for 12 hours because his tweet supposedly violated “its policy on ‘spreading misleading and potentially harmful information’ related to COVID.”

Activity on Solomon’s account suggests that it had been restored. “It's Twitter's second known suspension of a JTN staffer's account for comments about vaccines, which it lifted after the CDC confirmed the tweet was accurate,” according to Just the News. The link to the article Solomon tried to share, however, still has the warning label.

The report noted that Pfizer and several experts have claimed that the fully approved Comirnaty vaccine has the same ingredients and manufacturing process as the EUA vaccine, known as Pfizer-BioNTech. But it also cited the FDA's acknowledgment that the two are ’legally distinct’ owing to more stringent requirements for the Comirnaty vaccine, whose biologics license application (BLA) was approved.

The report cited two medical experts who knocked Twitter for censoring Solomon: Stanford School of Medicine professor Jay Bhattacharya and Harvard Medical School epidemiologist Martin Kulldorff. “There is nothing in the story that is not well reported or misleading,” said Bhattacharya. “‘Twitter’s censorship of COVID information has contributed greatly to the collapse in trust in public health.’”

Kulldorff added, “It is scary to live in such censorship, which also lea[d]s to self censorship."

‘It is outrageous and unfair that a story that is completely accurate and points out an important legal distinction between the two versions of vaccines gets blocked and my account suspended.’