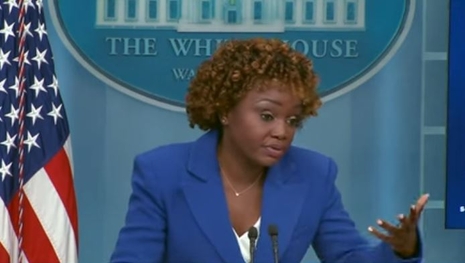 When asked about the White House’s concerns that a Musk-owned Twitter might become a “vector of misinformation,” Jean-Pierre made it clear that the White House has all eyes on Musk.

“This is something that we're certainly keeping an eye on,” she said. “It is [social media platforms’] responsibility to make sure when it comes to misinformation, when it comes to the hate that we’re seeing, that they take action, that they continue to take action. [W]e're all keeping a close eye on this. We're all monitoring what’s currently occurring."

Reuters reporter Andrea Shalal referenced a Stanford researcher who called Musk obtaining Twitter “a critical moment … in terms of making sure Twitter doesn’t become a vector of misinformation.” She asked Jean Pierre if the Biden administration was concerned about new users coming to Twitter and “who is it at the White House that is really keeping track of this?”

Jean Pierre emphasized that “Social media companies have a responsibility to prevent their platforms from being used by any user to insight violence especially violence directed at individual communities as we have been seeing and the president has been very clear on calling that out. He’ll continue to do that, and we’re going to continue to monitor the situation.”

KJP makes veiled threat to @ElonMusk: "This is something that we're...keeping an eye on...It is their responsibility to make sure when it comes to misinformation, when it comes to the hate...they take action....[W]e're all keeping a close eye on this. We're all monitoring" him. pic.twitter.com/uji3FGhGXs

The White House didn’t seem interested in “monitoring the situation” after social media companies allowed posts threatening violence after the U.S. Supreme Court’s decision in Dobbs v. Jackson overturned Roe v. Wade. The administration was similarly silent when it first took office following a violent summer of BLM and ANTIFA riots, many of which proliferated on social media platforms.