TikTok can’t seem to get rid of MRCTV no matter how hard it tries. The platform permanently banned, and then restored, MRCTV after placing 36 restrictions on the account.

The Chinese Communist Party-affiliated app “permanently banned” MRCTV “due to multiple violations of [its] Community Guidelines,” according to the notice TikTok sent MRCTV Thursday. The platform gave no specific reason for the ban, and when we attempted to “view details” of what happened, the app logged us out of our account. MRCTV appealed, and TikTok dropped the ban down to a seven-day restriction but only after it removed one more video. 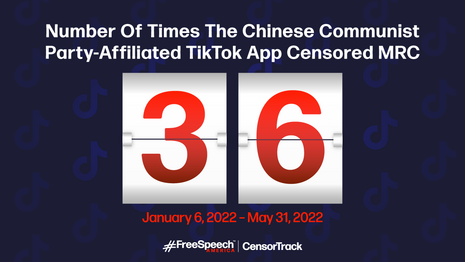 ikTok’s shenanigans are nothing new for MRCTV. The platform removed 30 videos, one of which it removed twice, and restricted the account five times, all in 2022.

TikTok most recently removed an MRCTV on-the-street video with Writer and Video Creator Tierin-Rose Mandelburg at the Bans Off Our Bodies rally in Washington, D.C. Mandelburg interviewed pro-abortion activists who explained their signs and why they came to the rally. She also gave her own comments and reactions to the rally. “Abortion is murder,” she said. “The narrative that they’re pushing is that anything inconvenient that you don’t want, you can just kill.”

TikTok removed the video after it restored MRCTV’s account for alleged “Community Guidelines violations,” according to the notice.

The platform removed a clip of "Reality Check" hosted by MRCTV Managing editor Brittany Hughes on March 10. She blasted the Biden administration for claiming it would only consider black female candidates to fill former Supreme Court Justice Stephen Breyer's seat. “The heck with the rest of her resume and the fact that she may in fact actually be the best nominee on merit,” Hughes said.

TikTok restored the content after MRCTV appealed. On May 16, the platform removed the video again and rejected a second appeal.

TikTok also removed 10 MRCTV videos and restored seven during the month of March. On March 23, the platform restricted the account for seven days and “temporarily blocked [the account] from posting, commenting, [and] messaging," according to the notice TikTok sent MRCTV. TikTok did not respond to MRCTV’s appeal but within 24 hours the platform extended the week-long restriction by another day.

MRCTV Blogger and On-Air Host Nick Kangadis excoriated Disney’s opposition to the Florida Parental Rights in Education Act, in a March 23 episode of "Things That Need to Be Said.” "[Disney] want[s] schools to teach five-year-olds about gay sex, transitioning to a different gender and engaging in whatever other activity that five-year-olds shouldn't be learning about," said Kangadis.

TikTok removed the video because it allegedly violated the platform's policy on "Hate speech" and "Harassment and bullying." TikTok rejected MRCTV's appeal.

The platform did not reply to MRC Free Speech America’s request for comment at the time of publishing.

Conservatives are under attack. Contact TikTok via email at communitymanager@tiktok.com or by mail at 5800 Bristol Parkway, Culver City, CA 90232 and demand Big Tech be held to account to mirror the First Amendment. If you have been censored, contact us at the Media Research Center contact form, and help us hold Big Tech accountable.