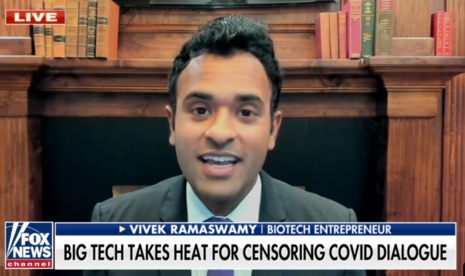 Ramaswamy, founder of Roivant Sciences and a Philanthropy Roundtable board member, tweeted: “It’s time to amend Section 230. Either you operate like a normal company, without the federal blanket of immunity, or you agree to abide by the First Amendment in return for that immunity. Tech companies can’t have it both ways.”

He has pushed back against Big Tech censorship multiple times leading to the release of his forthcoming book, Woke, Inc.: Inside Corporate America’s Social Justice Scam.

The author referred to Section 230 of the Communications Decency Act. Big Tech corporations have used the law as a shield from liability when they censor content. Ramaswamy argued in a Twitter thread that “attaching preconditions to receive a special form of federal immunity would not constitute government-compelled speech.” He further suggested these preconditions would be “no different than requiring the recipients of federal funding to abide by heightened constraints as compared to ordinary private actors.”

Ramaswamy called his ultimatum a “policy proposal, not a legal interpretation,” but he has explained his legal approach on Fox News and in The Wall Street Journal. He contended that liability protections and political incentives for companies to censor content together became a form of state action. “This is really state action in the clothing of private enterprise, and state action even if it is dressed up as private enterprise is still state action,” he told Fox News in January. “That’s why we argue it’s a First Amendment violation.”

Senator Josh Hawley (R-MO) and former Congressman Tulsi Gabbard (D-HI) proposed legislation last year that would tackle the problem Ramaswamy described. Senator Hawley’s  Limiting Section 230 Immunity to Good Samaritans Act further defined what content tech platforms are allowed to censor. It would also penalize platforms that fail to act in good faith and open up companies to lawsuits. Representative Gabbard’s Break Up Big Tech Act, according to her website, attempted to remove the “legal immunity that service providers have taken advantage of to act with impunity.”

Although neither bill made it past the introductory stages, Section 230 reform has appeared especially necessary given Big Tech’s proclivity for suppressing content it disagrees with. Facebook, for example,  suppressed the COVID-19 laboratory leak theory. And MRC President Brent Bozell hit on the issue of overhauling Section 230 directly. He said in a tweet: “Facebook, which claims to be fighting ‘misinformation’ essentially admitted today that THEY have been spreading misinformation for over a year. Yet another reason to remove the protections Facebook and others receive from section 230.”