MRC Vice President of Business and Culture Dan Gainor recently appeared on the Fox Business Network’s After the Bell to discuss President Donald Trump’s concerns about conservative censorship online and to call for "fairness." 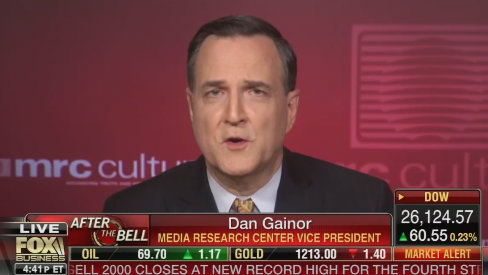 Co-host David Asman asked what could be constituted as illegal censorship by big tech companies such as Facebook or Google on Aug. 29. Gainor replied, “I think some of the concerns that have come up for conservatives involve politics, and so if you start to limit people’s access to campaign information, that gets into territory of the Federal Election Commission.”

“I’m not an expert and I certainly won’t pretend to be one at that,” he added, though he acknowledged that “it’s one of the criticisms that’s been brought up by the right.”

Asman mentioned the president’s wish that scrutiny of tech companies’ censorship practices doesn’t lead to regulation, but instead “fairness.” Still, he expressed worry that this could lead to too much government oversight. He asked, “Do you worry about trying to regulate speech on the internet?”

Gainor replied, “We’ve already got speech being regulated on the internet. The only question is ‘Who’s doing it?’” Of course, he admitted that government regulation of internet speech would be worse than what’s already going on, but mentioned that there must be action taken on some front against the current tech censorship. He then stated:

But to give you an idea of where things stand right now with the conservative movement -- we just came out with poll results that show that two-thirds of self-identified conservatives think that these social media companies are censoring conservatives. And almost one-third, 32%, have either left the platform of Facebook or are considering doing so.

Asman agreed and asked Gainor about Facebook’s own employees starting to see an issue. He replied, “The first step of any problem is identifying that you have a problem.” Gainor explained:

These companies are starting to admit that. They’re working with the conservative movement. We’ve got a coalition of 40 conservative groups trying to stop online censorship, and the idea that they are working with us is a good step. But it’s only one step.

Gainor ended his appearance by stating, “What we’re looking for ultimately is what the president said: We want fairness. We don’t want better treatment, but we don’t want worse.”