Travis Tritt: If You Look Like a Hippie, Talk Like a FED When It Comes to Censoring Rogan… 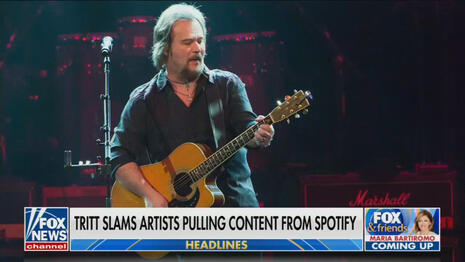 Grammy Award-winning Country singer Travis Tritt thinks it’s strange that singers who trumpeted free speech in the 60’s and 70’s are now fighting against it.

“I really find it strange that so many musicians from the 60’s and 70’s are now against the idea of free speech. Isn’t that one of the big things they were supposedly fighting for 50-60 years ago?” Tritt tweeted Friday, reacting to the news of how iconic musicians like David Crosby, Neil Young and Joni Mitchell believe their music should be removed from media streaming platform Spotify – because it won’t censor podcaster Joe Rogan.

“If you look like a hippie, but you talk like an establishment FED, you’ve probably lost your bearings somewhere along the way,” the Country music star commented in his next tweet.

“This whole @Spotify situation started when Neil Young gave a ‘him or me’ ultimatum to Spotify over Joe Rogan,” Tritt explained in a follow-up post, adding that “Once Neil’s supporters realized that Spotify would not drop Rogan, the narrative suddenly shifted to ‘artists unhappy with streaming pay.’ Spin doctors are spinning!”

Tritt began tweeting on the topic on Thursday, when he posted a pair of tweets and a link to an article explaining that, unlike some other pro-censorship artists, David Crosby is unable to pull his songs from Spotify, because he sold the rights to them:

“Since David Crosby is trending over demanding that his music be pulled from @Spotify , I’d like to point out that he sold his catalog last year and doesn’t own or control his music catalog anymore.”

“Like Neil Young, David Crosby wants to remove his music catalog from Spotify. Trouble is, he’s sold it.”