Twitter’s war with President Donald Trump and the Trump campaign has claimed at least 100 more casualties in the form of labeled tweets.

Since Monday, Nov. 30, Twitter has slapped 111 labels on Trump’s tweets and the tweets from his official campaign count, Team Trump. Many of these tweets included videos from Fox News, OAN, and Newsmax. In one instance, a tweet from Team Trump questioning why a label had been placed on another tweet was also given a label: “This claim about election fraud has been disputed.” Since May 31, 2018, Trump and his campaign have been censored by Twitter at least 436 times. Meanwhile, former Vice President Joe Biden and his campaign have been censored 0 times. 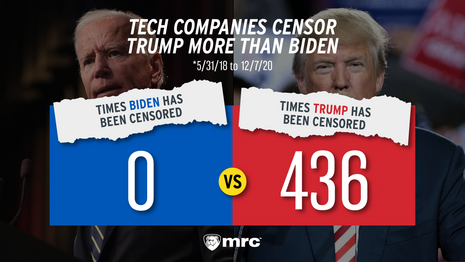 Tweets seemed to be given labels without any actual look at the context of the tweet. President Trump tweeted a Breitbart piece that was simply a write-up of his rally in Georgia, and this tweet still received a label, “This claim about election fraud is disputed.”

Labels indicate censorship because even Twitter has admitted that the company “de-amplified” labeled tweets. Twitter announced in an Oct. 9 blog: “Tweets with labels are already de-amplified through our own recommendation systems and these new prompts will give individuals more context on labeled Tweets so they can make more informed decisions on whether or not they want to amplify them to their followers.” The company also stated that users who choose to retweet labeled tweets would receive a prompt “pointing them to credible information.”

Expect even more censorship to come, if the new update to Twitter’s “hateful conduct” policy is enforced. “Today, we’re expanding our hateful conduct policy to address language that dehumanizes people on the basis of race, ethnicity, or national origin,” the official Twitter Safety account declared in a Dec. 2 thread.

Liberal media figures don’t find labeled tweets from the president’s account to be enough, however. CNN senior media reporter Oliver Darcy wrote, “Nearly every tweet from the president at this point is labeled for misinfo. Which had me thinking. Why doesn't Twitter just take the step of labeling his entire account as a known source of election disinfo? And why stop there? Why not label accounts that repeatedly spread claims the platform has to fact-check?”

Former Reddit CEO Ellen K. Pao had even more complaints, made public in a letter she and Project Include Founding Partner Laura I. Gómez wrote to Twitter CEO Jack Dorsey. “Yes, we know you’ve been flagging him, but flagging doesn’t help — it attracts more attention and more engagement,” they wrote.

Conservatives are under attack. Contact Twitter by its official (415) 222-9670,  Facebook, Twitter or mail to 1355 Market Street Suite 900 and demand that Big Tech be held to account to mirror the First Amendment while providing transparency, clarity on “hate speech” and equal footing for conservatives. If you have been censored, contact us at the Media Research Center contact form, and help us hold Big Tech accountable.