Update: USA Today admitted the error and removed the fact-check rating and the filter from the Newsbusters Facebook page.

Facebook’s third-party fact-checkers, coordinated by the Soros-funded Poynter Institute through the International Fact-Checking Network, are able to suppress whatever content they want.

NewsBusters received a fact-check from USA Today over its piece debunking a fact-check from USA Today. The initial fact-check, written by college student and intern Devon Link, claimed that it is “inaccurate to say” that the Democratic Party is responsible for the Civil War and founded the KKK. A response, written by NewsBusters Associate Editor Scott Whitlock, cited prominent 19th century writer Robert G. Ingersoll, who said, “Every man that loved slavery better than liberty was a Democrat.” 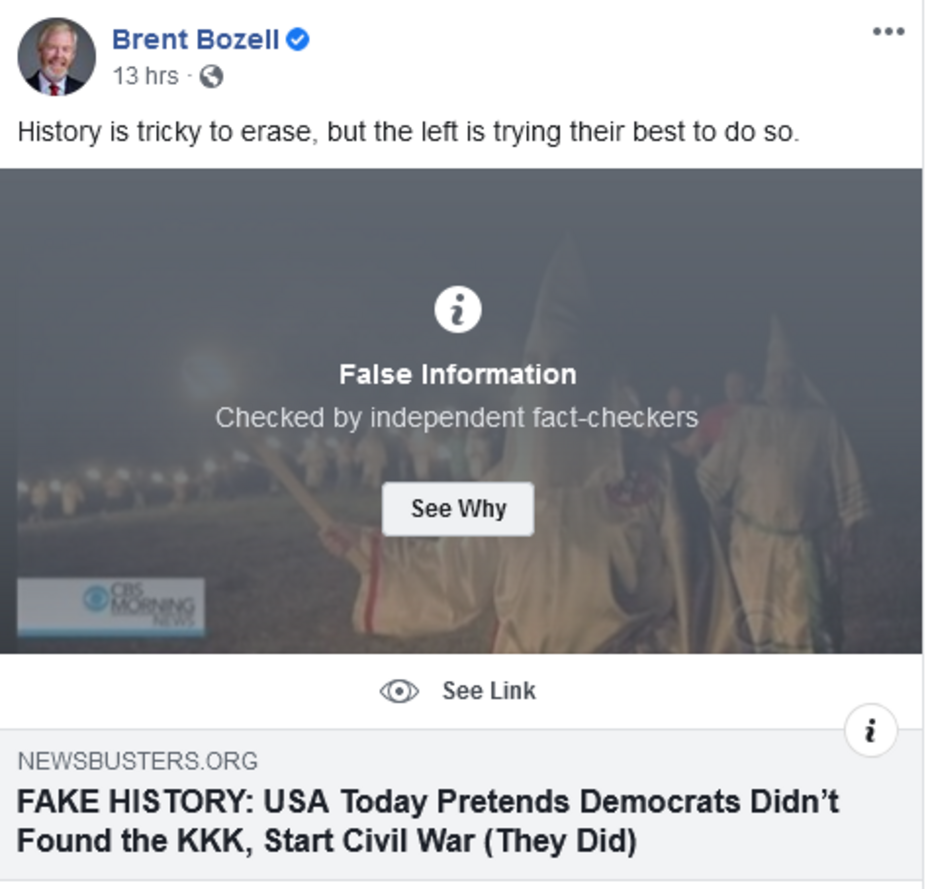 Princeton University Professor Tera Hunter was quoted by USA Today as saying, “At the core of the effort to discredit the current Democratic Party is the refusal to accept the realignment of the party structure in the mid-20th century.” NewsBusters noted that Hunter was a donor to former President Barack Obama. Using a Democrat to defend Democrat principles in a fact-check presents serious ethical problems.

Hunter’s answer? “The short answer is that the Democratic Party did not start the Civil War.”

The fact-check also relied on a monologue from comedian and host of The Daily Show Trevor Noah as a valid source of information. As if.

Not only was the initial rating “False,” but the label on the NewsBusters piece was “False.” The disagreement with the fact-check was given an interstitial, or a filter, and its outreach was suppressed.

It's pretty funny that MRC founder and president Brent Bozell wrote "History is tricky to erase, but the Left is trying to do so."