The Democratic presidential primary candidate ran the confrontational ad on Facebook, which she announced on Oct. 12 on her Twitter page. “We intentionally made a Facebook ad with false claims and submitted it to Facebook’s ad platform to see if it’d be approved,” she tweeted. In the ad, Warren wrote that Facebook CEO Mark Zuckerberg had endorsed President Donald Trump for 2020. 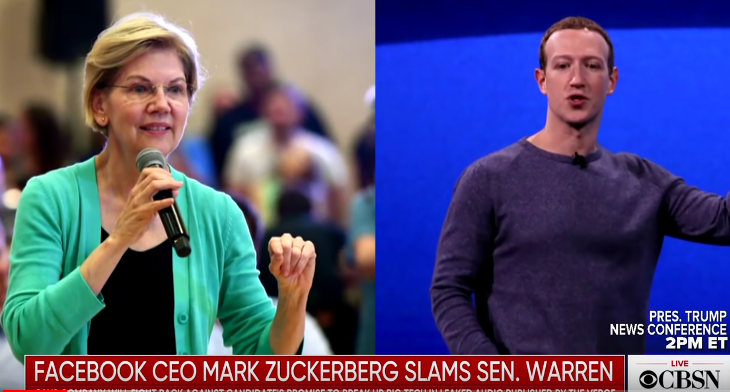 She then clarified — it wasn’t true. But what was true, according to Warren, was that: “[W]hat Zuckerberg *has* done is given Donald Trump free rein to lie on his platform -- and then to pay Facebook gobs of money to push out their lies to American voters.” The ad is still actively being promoted as of October 14, according to Facebook’s ad library.

“If Trump tries to lie in a TV ad, most networks will refuse to air it. But Facebook just cashes Trump's checks,” Warren wrote.

Warren’s additional response was that Facebook should decide for itself “whether you take money to promote lies. You can be in the disinformation-for-profit business, or you can hold yourself to some standards.”

The liberal media had a solution that would appease both tech liberals and Warren: just don’t run ads. Tech site TechCrunch wrote, “[I]f Facebook, Twitter, Snapchat and YouTube don’t want to be the arbiters of truth in campaign ads, they should stop selling them.” After all, content was so easily influenced by “hyperpartisan media from Fox News” because “juicy lies spread further than boring truths.”

Axios basically agreed, writing, “Every company or person who has ever been in charge of a platform, a message board, or a comments area knows that trolls are going to take any rule about acceptable content and stress-test it from a zillion directions.” The more pressure issue, argued Axios, was that it wasn’t just a troll “pushing the boundaries,” but the president of the United States.

Warren complained before when Facebook changed its ad policies. The platform announced that it would not fact-check politicians, nor would it fact-check political ads. Warren wrote that an ad released by the Trump campaign was “obviously untrue.”