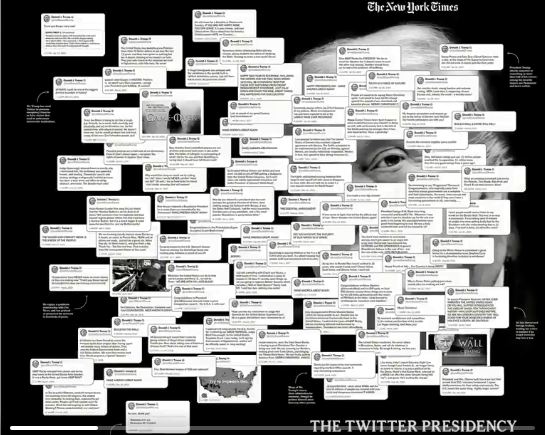 President Trump’s dangerous Twitter. That was the paper’s overriding obsession in Sunday’s edition. The enormous story launched on the top half of the front page and jumped to a special 10-page section, “The Twitter Presidency.”

The timing is apt, considering the paper is pressuring Twitter to be better than Facebook and actually squelch political messaging as the 2020 campaign nears.

The writers warned his tweets, "seemed to violate the company’s policies against abuse and incitement." Perhaps one reason why Trump’s tweets are under attack was this line:

Since he became president, the most frequent targets of his ire have been Democrats, investigations and the news media.

Some more snippy comments from the Times’ team followed with a rebuttal in parentheses that would never get printed:

“Mr. Trump’s attack on four Democratic congresswomen of color in July received a lot of attention. But it was not the first time he’d used Twitter to attack minority groups -- and it would not be the last. He’s done so more than 850 times.” (Trump attacks everyone in aggressive terms, including white Republican congressmen.)

“In more than 60 tweets, Mr. Trump has falsely accused the Obama administration of spying on his 2016 campaign.” (That would depend on one’s definition of “spying.”)

“Mr. Trump frequently promotes the idea that there is a nefarious “deep state” undermining his presidency.” (The pearl-clutching is hypocritical, considering the New York Times has now embraced the bureaucratic Deep State against the president.)

The attacks sharpened in the third section, “In Trump’s Twitter Feed: Conspiracy-Mongers, Racists and Spies." Yet the paper who gave a respectful airing to 9-11 conspiracies warned of "tinfoil-hat types:"

In fact, Mr. Trump has retweeted at least 145 unverified accounts that have pushed conspiracy or fringe content, including more than two dozen that have since been suspended by Twitter. Tinfoil-hat types and racists celebrate when Mr. Trump shares something they promote....

Most alarming was how the project came to be:

After Mr. Trump tweeted attacks on “the Squad,” the four Democratic congresswomen of color, our executive editor, Dean Baquet, felt like it would be worth doing a deep dive into what Mr. Trump has been tweeting. We wanted to know how many of those tweets are attacks on specific people, or minorities, or other groups, and shed light on something that is unique to this president.

Though there’s no explicit advocacy here about censoring Trump, one ponders whether the paper is laying a groundwork for Twitter to move against the president as his re-election campaign begins.