UPDATE: This story has been updated to note that NewsGuard's TV nutrition labels for six shows are available on its website. 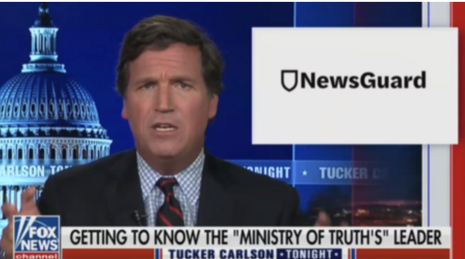 Variety said NewsGuard’s ratings of “140 cable, streaming, and network television shows and networks will be available to advertising agencies, marketers, and others starting January 2, 2023.”

NewsGuard claimed Carlson’s show “regularly advances false, misleading, and unsubstantiated claims on topics of importance such as COVID-19 and U.S. and international politics.”

"NewsGuard is a dangerous form of censorship," said MRC President Brent Bozell. "They are trashing Tucker's show and downgrading anything they don't like, then pushing advertisers to bail and force them off the air."

Meanwhile, CNN’s Inside Politics received a NewsGuard rating of 9/10, because host John King supposedly provides “multiple viewpoints in his reports, mostly through his own summary of dissenting views on a story, and interviews with prominent Republican lawmakers, pollsters, and consultants.”

But King is blatantly biased.

In July, as the economy continued to worsen under the Biden administration, Inside Politics’s King further let his bias show, whining that Americans should “give the Democrats some grace” because “governing is hard.” The month before, King called pro-Trump Republican candidates “a cancer in the Republican party.”

Further underscoring NewsGuard’s leftist bias, co-CEO Steven Brill at one point labeled the now-verified Hunter Biden scandal as a Russian “hoax,” and boasted in March that NewsGuard steers advertisers away from outlets (and now TV shows) that promote so-called “misinformation.”