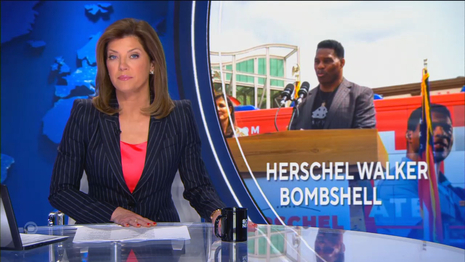 In an election year where the liberal media pounded Republicans with bad press while rewarding Democrats with a favorable news agenda, no race has seen more manipulative national media coverage than the Georgia Senate race between incumbent Democrat Raphael Warnock and Republican challenger Herschel Walker.

With the decisive run-off just days away, a new study by the Media Research Center finds the ABC, CBS and NBC evening newscasts have blasted the GOP candidate with 88 percent negative coverage, while the Democratic incumbent has enjoyed 71 percent positive press. More than half of the coverage (nearly 46 minutes, out of 87 minutes total) has consisted of personal allegations against Walker, vs. a mere 11 seconds spent on personal accusations against Warnock.

Abortion was the only policy issue to receive significant airtime (just under four minutes), and network reporters unanimously employed the “abortion rights” labels preferred by the Left, using it to tar Walker as a threat to women while concealing Warnock’s extremism on the same issue.

■ All Scrutiny on Walker: The networks spent the lion’s share of their airtime focusing on Walker, while Warnock received a free ride. Our analysts looked at all 87 minutes of evening news coverage of the Georgia Senate race from September 1 through November 29. About three-fourths of this coverage (64 minutes, 42 seconds) was spent discussing Walker, vs. 21 minutes, 12 seconds talking about Warnock — a three-to-one disparity. [The remaining minutes of airtime focused on voters or the election process without referencing the candidates.]

This lopsided allocation of airtime was not meant as a favor to the Republican. The evening news coverage was chock full of evaluative statements about Herschel Walker (66), nearly all of which (88%) were negative. In contrast, Warnock was on the receiving end of just seven evaluative comments, but most of them (71%) were positive. [See the full methodology at the bottom of this article.] 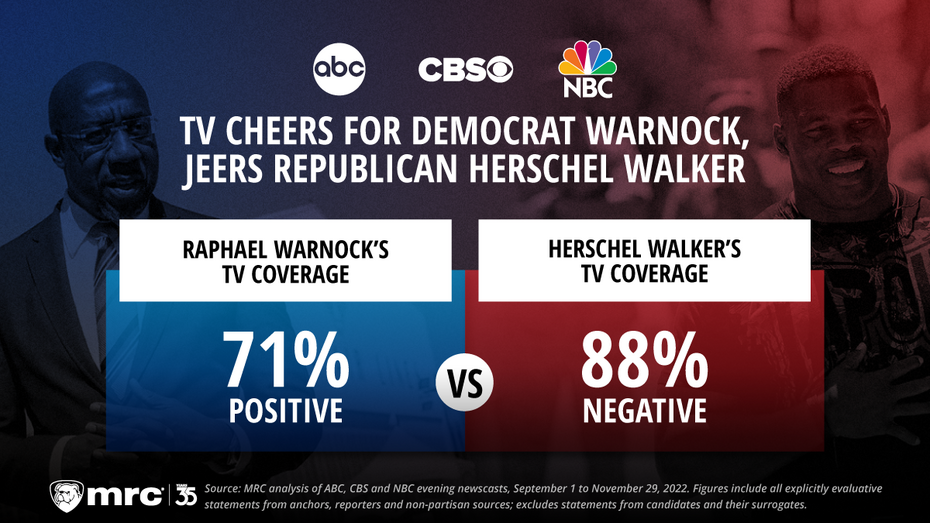 Back on September 22, for example, CBS Evening News reporter Nikole Killion called Walker “the Trump-backed Heisman Trophy winner [who] has been plagued by gaffes and accused of lying about his past,” while Warnock, according to her network’s poll, “gets favorable marks on character and experience.” Killion then amplified this point by showing viewers a pleased Georgia voter: “I believe Reverend Warnock is the better candidate.”

On November 4, Killion was back with another soundbite from a voter enthused by Warnock: “I am a Warnock girl, right, because I really believe that he exercised the most in civility and I believe he’s capable.”

■ No Airtime for Warnock’s Personal Controversies: The massive disparity we found in tone is directly due to the lopsided agenda of these news stories. These networks found it worthwhile to delve into multiple accusations against Herschel Walker, while showing zero interest in allegations against his Democratic competitor.

Walker’s coverage was dominated by claims — denied by Walker himself and not proved by any media outlet — that he paid for abortions for two girlfriends decades ago (36 minutes, 21 seconds of airtime). The networks also provided a combined four minutes, 28 seconds to the flap over Walker’s display of an honorary police badge at his debate with Warnock; two more minutes on accusations he’s an absentee father; plus another two minutes, 50 seconds for other personal controversies.

The combined 45 minutes, 40 seconds spent on this cornucopia of charges against Walker amount to half (51%) of all network evening news coverage of the Georgia Senate race since September 1. Compare that to the meager 11 seconds — on ABC, October 16 — spent on relaying an allegation against Warnock that he’s failed to pay adequate child support.

The media’s silence cannot be justified — reporters covering the race knew about Warnock’s child support problem for the entire campaign. Back in April, the Atlanta Journal-Constitution reported that “U.S. Sen. Raphael Warnock’s ex-wife is seeking changes to their child custody arrangement in court documents that claim he’s in ‘willful contempt’ of the agreement as she attempts to move outside of Georgia.”

Yet CBS and NBC, obsessed with accusations against Walker, never said a word about this story, while ABC only mentioned it — briefly — on a Sunday night newscast, and then only because it was raised during the Warnock-Walker debate. 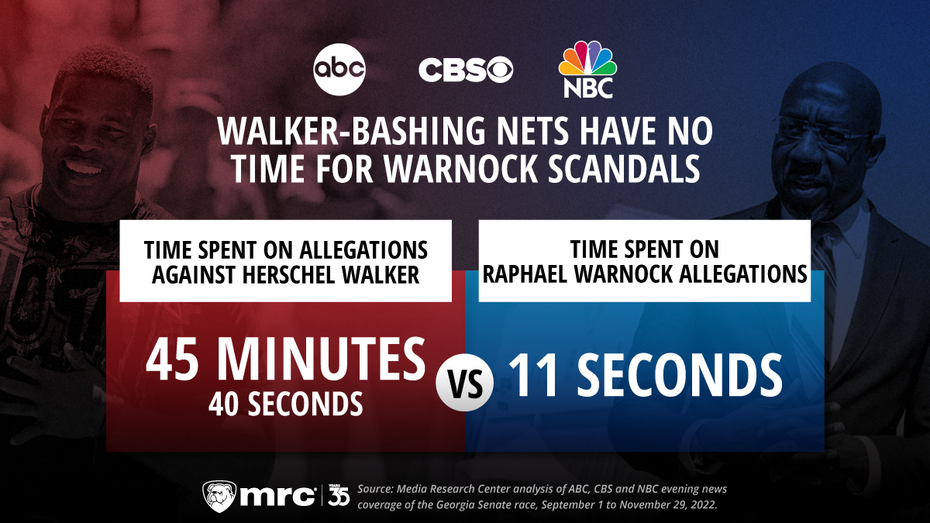 There were other anti-Warnock stories utterly absent from the airwaves. For instance, the Washington Free-Beacon reported that the church where Warnock serves as senior pastor “has moved to evict disadvantaged residents from an apartment building it owns, one of whom it tried to push out on account of merely $28.55 in past-due rent.”

In the wake of the Free-Beacon’s reporting, the National Legal and Policy Center called for an IRS investigation to see if Warnock’s church had violated its tax exempt status. Yet while the national networks had no shortage of airtime for accusations against Walker, these developments — at the very least, an embarrassment to the Democrat — were never mentioned on any of the Big Three evening newscasts.

■ Concealing Warnock’s Abortion Extremism: Network reporters had no trouble reaching for inflammatory language to present the Republican candidate as a danger to women rather than as a protector of the unborn. “Walker supports banning all abortions, without exceptions in cases of rape, incest or to save the life of the mother,” CBS’s Norah O’Donnell warned on October 4.

All three networks invariably employed the “abortion rights” labeling promoted by liberals, rather than the “pro-life” labeling preferred by conservatives. ABC’s Rachel Scott on October 5, for example, juxtaposed how “Walker opposes abortion rights in all cases, no exceptions,” while Warnock “is out on the campaign trail making it clear that he supports abortion rights.”

“I’m supporting Warnock,” a random voter explained on CBS October 17, “because, obviously as a woman, I need to be able to protect my rights.” There were no equivalent soundbites from pro-life voters grateful for Walker’s stance.

TV viewers would not know that Warnock’s position is far to the left of the average voter. As National Review’s Rich Lowry pointed out in late October, Warnock refused in his debate to provide any hint that he opposed even late-term abortions or abortions for sex-selection. And, “as a co-sponsor of the so-called Women’s Health Protection Act, the senator affirmatively wants to wipe away any restrictions on abortion in all 50 states. And he’d kneecap the filibuster to do it.”

Very few senatorial or gubernatorial elections receive the heavy national media attention that the Big Three devoted this year to the race in Georgia. But instead of trying to fairly inform audiences about both sides, the national reporters parachuting into this race were consumed with damaging the Republican candidate and boosting the Democrat.

METHODOLOGY:  We calculated spin by tallying all clearly positive and negative statements from non-partisan sources (in other words, reporters, anchors, voters and other unaffiliated sources). This excludes coverage that merely reflects the partisan back-and-forth of the campaign, in order to isolate the spin being imparted by the networks themselves. It also excludes “horse race assessments” about the candidates’ or a party’s prospects for winning or losing. This is identical to the methodology we used in 2018, to enable direct comparisons between the coverage of both midterms.