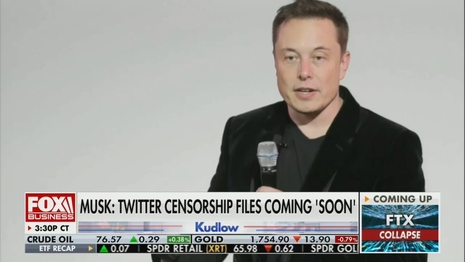 A Twitter user tweeted Nov. 23, “Raise your hand if you think @ElonMusk should make public all internal discussions about the decision to censor the @NYPost’s story on Hunter Biden’s laptop before the 2020 Election in the interest of Transparency.” Musk responded, “This is necessary to restore public trust.”

Musk then tweeted Nov. 28, “The Twitter Files on free speech suppression soon to be published on Twitter itself. The public deserves to know what really happened.”

A 2020 MRC poll found that 45 percent of President Joe Biden’s voters weren’t fully aware of the New York Post story precisely because the media and Big Tech whitewashed it. Had Americans been fully aware of the scandal, 9.4 percent of Biden voters would have abandoned him, flipping all six of the swing states he won to former President Donald Trump, giving Trump a victorious 311 electoral votes.

The Daily Wire noted, “Media outlets such as The Washington Examiner, CBS News, The New York Times, and The Washington Post have confirmed the laptop’s contents and messages, in part regarding foreign business deals Hunter Biden worked on in Ukraine, China, and elsewhere.”

Big Tech not only suppressed the Hunter Biden scandal when his father was a presidential candidate, the tech companies continued to protect Joe Biden after he took office. An MRC Free Speech America study found in April, based on MRC’s unique CensorTrack database, that Big Tech censored criticism of Biden 646 times over a two year period. That includes 140 instances of censorship of the Hunter Biden scandal.