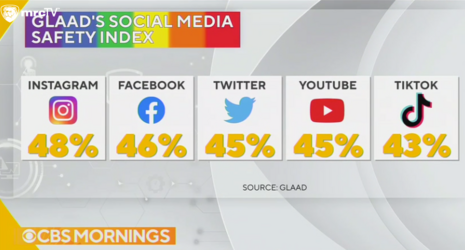 Ellis called for government intervention on social media while discussing the report on air.

Meta-owned Instagram had the highest score at 48 percent, while TikTok had the lowest score at 43 percent. But all five platforms scored 100 percent for “Policy commitment to protect LGBTQ users.”

Several platforms received a zero for “Targeted deadnaming and misgendering prohibition” in the GLAAD report, but GLAAD gave TikTok 100 percent and Twitter 91.67 percent in this category. Twitter just caused a controversy by suspending psychologist Dr. Jordan Peterson from its platform for supposedly “deadnaming” celebrity “Elliot” Page, who now identifies as a man. Ellis cited this instance while talking to CBS, and “deadnamed” Page, saying, “her deadna—his deadname was used.”

A targeted group harassment bar graph on page 13 of the report did not name Christians, even though anti-Christian hatred and violence have escalated since the Supreme Court overturned Roe v. Wade last month.

Some detransitioners, or individuals who return to their biological sex, recently spoke out to describe both the harm transgender ideology caused them and how much persecution and hate they receive for not wanting to be “transgender” anymore.

Ellis claimed on CBS that online hate has motivated over 300 “anti-LGBTQ bills” to be introduced in state legislatures across the country. One such piece of legislation would presumably be Florida’s bill restricting radical and explicit sexualized content in elementary schools.

The report cited the leftist Media Matters for America in stating that “Conservative media” are using Facebook to spread “anti-trans narratives.” GLAAD failed to note that this alleged “anti-trans” content includes scientifically based objections to gender reassignment surgery.

Conservatives are under attack. Contact your representatives and demand that Big Tech be held to account to mirror the First Amendment. If you have been censored, contact us at the Media Research Center contact form, and help us hold Big Tech accountable.