Swisher claimed that Facebook shouldn’t be “choking people in the dark,” which Haugen agreed to, during the podcast. Haugen also advocated for a “free market of ideas” online. In contrast, Haugen said that Facebook subsidizes hate to make money. Her solution? More censorship.

“Facebook has done a really good job of distracting us with the censorship debate,” Haugen complained. She doesn’t appear to be all too concerned about Facebook’s biased censorship, believing discussion of the issue is an obstacle to the changes for which she advocates. 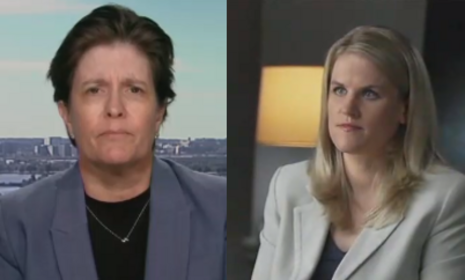 “Will [Facebook] go far enough” in its reform efforts around areas including alleged “misinformation?” Haugen pondered. “I don’t think they will until we have more mandated transparency.”

Swisher and Haugen both slammed Facebook executive Andrew Bosworth, who recently pushed back against more censorship calls. Bosworth claimed that Facebook needed to be “democratic” in allowing speech on the platform, and added that individuals must be responsible for what they consume, not just social media platforms. Haugen claimed that Bosworth was blaming “the victim.”

Haugen’s proposed algorithmic changes to social media would include “friction” to make sharing certain content more difficult on Facebook. Swisher agreed, with an elitist argument for censorship, “So you’re saying we should stop, we should help [users] stop and think before they do something stupid?” Haugen responded, “Yes.” The “whistleblower” condemned one view shared by some Facebook employees that “more speech” is a solution for “bad speech.”

Haugen admitted to Swisher that members of her “comms team” had previously worked for Democratic campaigns and that the nonprofit Luminate, a network member of leftist eBay founder and billionaire Pierre Omidyar, had paid “operational” expenses for her. Yet Swisher mocked reports pointing to the questionable nature of Haugen’s politically leftist advisors.

Haugen also denied that she was incentivized by a potentially large financial reward for her “whistleblowing,” though Haugen then mused over how she would invest the money if she received it. The “whistleblower” even said that she would work for Facebook again if offered, because she still believes its work is important. Haugen wants to start a movement of young people who drive “rituals of governance” around Big Tech.