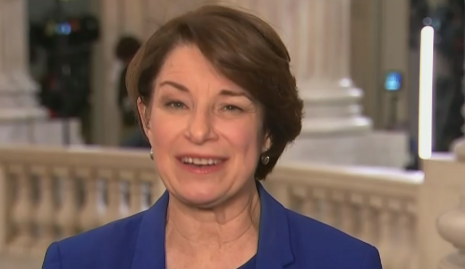 Klobuchar introduced the “Nudging Users to Drive Good Experiences on Social Media Act” or the “NUDGE Act.” Sen. Cynthia Lummis (R-WY) co-sponsored the legislation. The bill would require that independent researchers work to find “content-agnostic platform interventions,” or solutions to online addiction and alleged “harmful content” on social media, according to the bill text.

The legislation could  promote censorship, however. “For too long, tech companies have said ‘Trust us, we’ve got this,’” Klobuchar stated in a press release. “But we know that social media platforms have repeatedly put profits over people, with algorithms pushing dangerous content that hooks users and spreads misinformation. This bill will help address these practices.”

Constitutional scholar and Fox News legal analyst Jonathan Turley speculated in an op-ed for The Hill that the legislation could be a Trojan Horse for censorship. “Beware of politicians bearing reforms,” he wrote. “How is combatting ‘misinformation’ content-neutral? The answer will be imposed by a new commission that can declare a site’s failure to take ‘appropriate’ measures as constituting ‘unfair or deceptive acts or practices.’ That would create a glacial chilling effect on these companies, which will err on the side of censorship.”

The bill itself does not mention “misinformation” specifically but hammers the spread of supposed “[v]iral harmful content.” While the bill claims to be “content-agnostic,” it focuses on “algorithmic amplification” and alleged “harmful content” such as so-called “hate speech.” This indicates a censorship angle.

How can free speech advocates be sure that new, supposedly independent moderators won’t label content not approved of by the left as “hate speech,” and target it with censorship?

The bill states that the “Director of the National Science Foundation” would “enter into an agreement with the National Academies of Sciences, Engineering, and Medicine” to conduct studies to build “content-agnostic interventions” to implement online, including actions against “algorithmic amplification.”

This is just the latest effort from Klobuchar to increase online censorship. Klobuchar has been vocal about the need for increased restrictions on what she deems “misinformation.”

Conservatives are under attack. Contact your representatives and demand that Big Tech be held to account to provide an equal footing for conservatives. Tech giants should afford their users nothing less than the free speech embodied in the First Amendment as interpreted by the U.S. Supreme Court. If you have been censored, contact us using CensorTrack’s contact form, and help us hold Big Tech accountable.