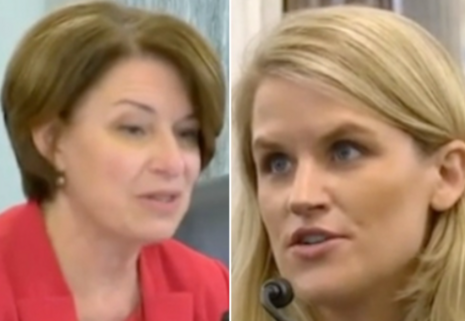 Haugen, the Facebook employee whistleblower behind The Wall Street Journal’s recent exposés, testified in the Senate hearing titled: “Protecting Kids Online: Testimony from a Facebook Whistleblower.” Sen. Klobuchar (D-MN) and Sen. Ray Luján (D-NM), both of whom attended the hearing, introduced a bill which would revoke liability protections for tech companies if alleged “health misinformation” is algorithmically amplified by the platform during a health crisis. “Sen. Luján and I have put together a, an exception, actually, to the 230 immunity when it comes to, uh, vaccine misinformation in the middle of a public health crisis,” Klobuchar said at the hearing today. The senator touted YouTube’s recent free speech restrictions. “Last week YouTube announced it was swiftly banning all anti-vaccine, uh, misinformation. And I have long called on Facebook to take similar steps,” Klobuchar stated.

“Do you think they [Facebook] can remove this content, and if they put sufficient resources?” Klobuchar asked Haugen. “We know the effect of this. We know that over half the people that haven’t gotten the vaccines, it’s because of something that they’ve seen on social media. … Are there enough resources to stop this from happening?” Klobuchar ended. Haugen replied in the negative, saying Facebook’s artificial intelligence (AI) usually catches only “10 to 20 percent of content.” Klobuchar replied: “There you go.”

Earlier in the hearing, Klobuchar also claimed that lack of censorship by Facebook during the 2020 election process facilitated the “Jan. 6 insurrection” at the Capitol. “[T]heir algorithms are fostering polarization, misinformation, and hate,” Klobuchar said. She claimed Facebook “allowed 99 percent of their violent contact to remain unchecked on their platform, including lead-up to the Jan. 6 insurrection.” Sen. Richard Blumenthal (D-CT) made a similar statement; “[Facebook] has profited off spreading disinformation and misinformation, and sowing hate.”

Sen. Ed Markey (D-MA) also called for more censorship, touting his Algorithmic Justice and Online Platform Transparency Act, which he said would “ban discriminatory algorithms that harm vulnerable populations online, like showing employment and housing ads to white people but not to black people in our country.”

Even the Facebook whistleblower endorsed more restrictions. Haugen said, if she were making decisions for Facebook, “I would, um, immediately implement the quote ‘soft interventions’ that were identified to protect the 2020 election.” She made the example of a user requirement to click a link before sharing it, similar to a Twitter policy that she claimed “reduces misinformation.” Sen. Ted Cruz (R-TX), however, called out the issue of “the pattern of Facebook and social media engaging in political censorship.”

Haugen, who was asked if she recommended certain solutions to Facebook’s alleged toxicity, repeatedly endorsed more congressional legislation and more government regulation. Haugen asserted that government regulation could even boost Facebook’s profitability. Sen. John Hickenlooper (D-CO) endorsed expanding the government's role in regulating social media. “So regulation might actually make Facebook more profitable over the long term,” Haugen claimed. “That’s often the case, I think the same could be said for automobiles,” Hickenlooper agreed. Corporate finance expert Michael J. Boyle wrote in August that government regulation of the automotive industry actually has many negative effects, such as an increase in production costs, among other negative externalities.

U.S. Senators Marsha Blackburn (R-TN) and Blumenthal held a hearing Tuesday, Oct. 5, 2021 titled, “Protecting Kids Online: Testimony from a Facebook Whistleblower.” Blumenthal and Blackburn are the Chair and Ranking Member of the Senate Commerce, Science, and Transportation Subcommittee on Consumer Protection, Product Safety, and Data Security. “This is one of several hearings I am holding with Senator Blackburn as part of our longstanding efforts to ensure children are protected online,” said Blumenthal. “Facebook has a lot to account for,” Blackburn stated.

Contact your senators and demand that they mirror the First Amendment: Tech giants should afford their users nothing less than the free speech embodied in the First Amendment as interpreted by the U.S. Supreme Court. If you have been censored, contact us using CensorTrack’s contact form, and help us hold Big Tech accountable.