Americans may already be worried about the overall competency of the medical field post-COVID-19, but now medical professionals are reportedly increasingly using virtual reality (VR) and augmented reality (AR) to train their colleagues. Not only that, but scandal-ridden Meta, the name of Facebook’s new parent company, and Microsoft are also reportedly building some of the VR/AR technology being used. 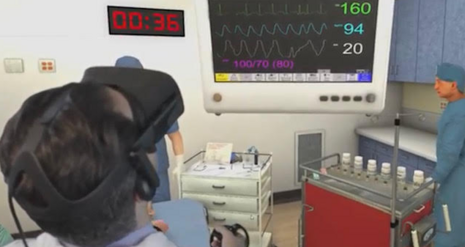 Several uses for VR/AR have emerged for medical education, including training and proctoring, according to health technology company Abbott. Chris McGlone, director of training and education for Abbott's U.S. vascular business, said in an Abbott blog post that 6,000 cardiovascular physicians have been virtually trained, while 60,000 technicians and nurses also received virtual training over the past five years. McGlone said that the majority of those virtually trained physicians have been trained since the COVID-19 pandemic began.

One tool used by McGlone and his team is Meta’s Oculus, including potentially the Oculus Quest VR headset in the future, according to Abbott. McGlone said he and his team are also using Microsoft’s HoloLens 2 headset. Both Meta and Microsoft have used technology to control narratives and/or censor free speech, raising important questions about how their VR/AR technology will impact the medical field.

In some cases, VR/AR have allowed physicians to proctor tests in other countries, Abbott wrote. Other medical professionals can watch 360-degree videos of procedures on VR headsets, or walk around a “virtual cath lab.” The latter experience allows a medical professional to make changes to his “environment” using a joystick and “practice making clinical decisions in this virtual environment,” as McGlone reportedly put it.

While this does sound like an amazing innovation in some ways, allowing global sharing of expertise and new training methods, the fact that Meta and Microsoft are building some of the technology is concerning. Meta (Facebook), for instance, has heavily censored COVID-19 information that contradicts real-time establishment narratives. Can Americans be certain that complete medical objectivity will reign in the building and use of medical VR/AR technologies?

Abbott wrote that VR and AR are here to stay in the medical field, stating, “nothing on the horizon — digital or otherwise — shows any sign of changing this direction.” Only the future can reveal exactly how virtual reality will shape and change the medical field.

Conservatives are under attack. Contact your representatives and senators and demand that any ideas they support protect conservative speech. Tech giants should afford their users nothing less than the free speech embodied in the First Amendment as interpreted by the U.S. Supreme Court. If you have been censored, contact us using CensorTrack’s contact form, and help us hold Big Tech accountable.