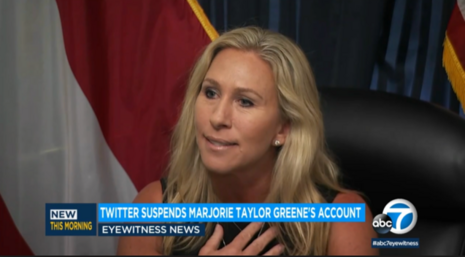 Stephen Miller was a senior advisor to former president of the United States Donald Trump and the Founder of America First Legal.  Miller tweeted, “A modest proposal for GOP if they take Congress: approps rider barring tech corps from importing foreign labor if they de-platform a fed officeholder.” Miller’s tweet further explained, “(Note: Dems’ BBB allows Big Tech to import an entire overseas workforce, meaning US citizens would be censored by noncitizens).”

Masters tweeted a clip of his discussion of tech reform on Tucker Carlson Today, commenting, “Twitter banning MTG (for posting facts about COVID and vaccine injury no less) is a complete abuse of power. It’s far past time to repeal 230 protections and treat the Big Tech companies as common carriers.”

Filmmaker, author, and podcast host Dinesh D’Souza tweeted the news of Greene’s ban as an example of why he personally is on GETTR as well as Twitter, stating of Big Tech, “They are on a witch hunt to stifle dissent.”

Bestselling author and Founder and President of the Foundation for Liberty and American Greatness (FLAG) Nick Adams also tweeted support for Greene: “RT if you stand with Marjorie Taylor Greene!”

Even Department of Justice reporter for the Washington Examiner Jerry Dunleavy tweeted, “Twitter banned GOP politicians Donald Trump & Marjorie Taylor Greene yet allows, for instance, the Chinese government and the Chinese Communist Party to operate numerous massive accounts and spread disinformation — including about COVID-19 — on its platform. These are just facts.”

MRC Free Speech America previously reported on how Iranian and Chinese government-affiliated accounts spread violent rhetoric on Twitter without censorship from the platform.