“Who is going to be the unbiased arbiter of truth? I don’t think it exists,” Sen. Ron Johnson (R-WI) said, challenging the leftist narrative pushing for greater censorship of online speech.

Johnson called out leftist witnesses for ignoring social media censorship bias or suggesting the bias favors the right at a Thursday Senate hearing. He also challenged the overwhelming narrative that government regulation is the answer to social media’s problems, saying, “Our first line of defense is with parents.” 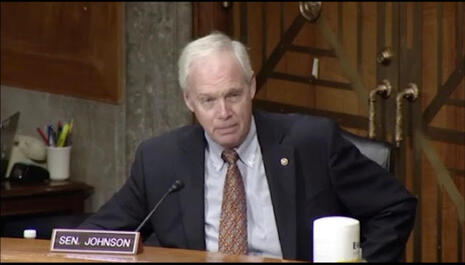 Johnson further cited Google researcher Dr. Robert Epstein’s research indicating that Google may have skewed search results to favor Democrats. “It doesn’t seem to me that the impact or the intent of their manipulation of data, uh, would tend to favor conservative groups or conservative thought,” Johnson said. He ultimately asked those pushing for more regulation, “Who is going to regulate this? How is free speech different when it’s on a platform versus when it’s just spoken in the town hall?”

Johnson noted that democracy seems to be put at risk not just by so-called extremist speech but by tech platforms manipulating data. “Now, I’m certainly questioning the 230, Section 230 liability protections, when you have these platforms acting as publishers, which is what they are doing when they censor—primarily conservative thought. I’ve been censored myself, repeatedly,” Johnson stated. The senator asked who could regulate constitutional free speech well. Johnson ultimately concluded that social media seems to favor the left more than the right and that regulation could violate constitutional rights.