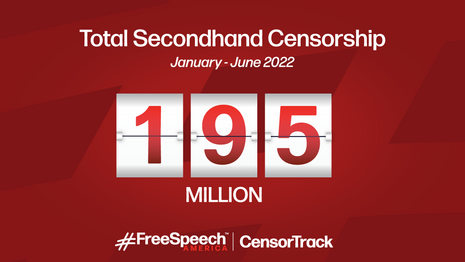 Throughout the first two quarters, MRC counted 309 total individual censorship cases that translated to no fewer than 195,251,589 times that Big Tech kept information from social media users through secondhand censorship.

Big Tech companies tirelessly worked to shackle the spread of content across several issue areas; most notably, elections, President Joe Biden and “transgenderism,” from April through June. This discriminatory information control was an attempt to strong-arm Americans to embrace leftist orthodoxy.

These and other instances of censorship are highlighted in MRC Free Speech America’s unique CensorTrack database.

The Media Research Center's CensorTrack.org, has identified and documented over 4,000 individual cases of censorship. For purposes of this report, we examined the second quarter of 2022. During that time, 133 cases of censorship were identified. MRC Free Speech America analyzed the censored accounts and added the followers belonging to each person and group targeted by Big Tech during that three-month period. MRC Free Speech America found that secondhand censorship affected users no less than 49,500,152 times during the second quarter.

MRC defines secondhand censorship as the number of times that users on social media had information kept from them.

This secondhand censorship report only scratches the surface of censorship during the second quarter of 2022, as it only covers documented cases from our one-of-a-kind CensorTrack database.

See this link for a breakdown of our second-quarter secondhand censorship numbers.

But contrary to the Times’ reporting, MRC Free Speech America found that Facebook’s election-related censorship persists at an alarming rate.

The platform spiked an election-related post by Daily Wire Editor Emeritus Ben Shapiro in May, with the help of its fact-checking partner PolitiFact, according to a May 10 CensorTrack entry. The “fact-checker” flagged a Daily Wire article that cited political commentator Dinesh D’Souza’s documentary “2000 Mules” calling the article “partly false,” as “the same information was checked in another post by independent fact-checkers.” The movie examined voter fraud in the 2020 election by using cell phones’ geolocation data. The secondhand censorship effect of the fact-check meant that Shapiro’s 8.5 million Facebook followers couldn’t see information linking potential voter fraud to the 2020 election.

Georgia Attorney General Chris Carr tweeted in May that second-time Georgia gubernatorial candidate Stacey Abrams supported moving the 2021 MLB All-Star game from Atlanta to Denver because of allegedly stricter voting laws passed in her state. That post drew a “false” fact-check, which cited an Abrams op-ed in USA Today that initially expressed a pro-boycott stance before being updated to express an anti-boycott viewpoint.

Twitchy tweeted side-by-side excerpts from both versions of the op-ed. Facebook originally flagged the Twitchy article for "missing context," slapping the same phony fact-check on the article, before removing the flag. The Facebook fact-check meant that Twitchy’s 1,080,200 Facebook followers were impeded from seeing the post.

Most recently, Chinese Communist Party (CCP)-linked TikTok removed a clip of MRCTV host Nick Kangadis talking about the intelligence and empathy level (or lack thereof) of the Biden administration, as detailed in a June 15 CensorTrack post. In a clipped episode of his show, Kangadis talked about several flubs and gaffes of the Biden "regime," as he called it. TikTok removed the video and rejected MRCTV's appeal, giving only the vague explanation that the content violated its “Community Standards."

MRC counted 25 individual cases of censorship of content critical of so-called “transgenderism” in the second quarter. Secondhand censorship affected the followers of these accounts 8,111,001 times during the quarter.

Twitter perpetrated the most substantial suppression of so-called “transgender”-related content  in the second quarter in June. The platform removed a post by renowned psychologist Jordan Peterson when he used “transgender” actor Elliot Page’s given name, Ellen Page.

“Remember when pride was a sin? And Ellen Page just had her breasts removed by a criminal physician,” Peterson purportedly tweeted according to screenshots tweeted by his daughter Mikhaila Peterson. Twitter apparently deemed the post to violate its rules against “hateful conduct.”

Another egregious example of censorship happened in April, when TikTok removed a video by PragerU personality Amala Ekpunobi. The platform labeled her criticisms of top surgery "Hate speech,” according to an entry in CensorTrack. As a result of this censorship action, secondhand censorship affected Ekpunobi’s TikTok followers 599,400 times because they couldn’t see her post opposing genital mutilation.

For the second quarter in a row, CensorTrack entries indicated that Facebook inflicted the most secondhand censorship of any platform.

Facebook users experienced secondhand censorship 30,157,298 times in the second quarter, according to data logged in the MRC CensorTrack database.

The largest instance of Facebook’s secondhand censorship in terms of follower count was the suppression of Shapiro’s election-related post detailed in the “Elections” section above.

The No. 2 most egregious case of Facebook’s second-quarter secondhand censorship happened on April 5, when the platform flagged a pro-life post by conservative influencers Ben and Candy Carson as “missing context.” The post merely stated that Colorado Gov. Jared Polis (D) had signed a law legalizing abortions “up until the moment of birth.”

The former Housing and Urban Development secretary and his wife called the law “demonic.” They had 5,200,000 followers when they were censored.

Twitter – the second worst violator – withheld information from users through secondhand censorship 12,845,270 times in the second quarter, according to CensorTrack.

Twitter’s most substantial instance of secondhand censorship is detailed in the Peterson “transgenderism” critique highlighted above. But the platform’s biased censorship affected the second largest number of viewers with secondhand censorship when it censored Human Events journalist Jack Posobiec on April 10. Posobiec posted on GETTR that his offending Twitter post called Disney “groomers” – apparently referring to the company’s opposition to a recent Florida law – according to a CensorTrack entry.

TikTok was the third worst violator in terms of secondhand censorship in the second quarter of 2022. The platform kept information from users a total of 4,053,242 times in the second three months of this year.

Secondhand censorship on TikTok walloped Young America’s Foundation (YAF) harder than any other organization or individual in the second quarter.

Akin to many other cases of censorship by TikTok, the platform did not provide a reason for its latest suppression of YAF in the second quarter, as highlighted in a June 16 CensorTrack entry.

YAF, a youth organization that describes itself as the “principal outreach organization of the Conservative Movement,” makes TikTok videos on a variety of topics, including “transgender” ideology, abortion, woke culture and capitalism.

Earlier in June, TikTok removed a YAF video of political commentator Ben Shapiro saying that supposed medical experts who believe in male pregnancy are not doctors but rather are activists, according to a June 15 CensorTrack entry. The deletion meant that YAF’s 187,200 TikTok followers couldn’t see content featuring a science-based perspective on so-called “transgenderism.”

Censorship goes beyond silencing one person. It  cramps national debate and dialogue on issues including elections, President Joe Biden, “transgenderism” and many other issues.

The longer that national policymakers wait to take action against the grave threat posed by Big Tech censors, the more that our American republic and free speech are threatened.

MRC continues to call on the American public to push tech companies to end their authoritarian suppression of opposing viewpoints.