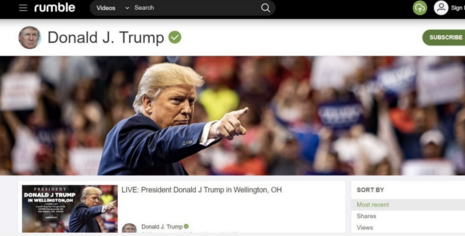 Trump’s account is verified and has just one video so far, an upload of Saturday’s rally in Ohio.

“1/ After review, and in light of concerns about the ongoing potential for violence, we removed new content uploaded to Donald J. Trump’s channel for violating our policies. It now has its 1st strike & is temporarily prevented from uploading new content for a *minimum* of 7 days,” YouTube said in a tweet, referring to the platform’s “strike” system.

“2/ Given the ongoing concerns about violence, we will also be indefinitely disabling comments on President Trump’s channel, as we’ve done to other channels where there are safety concerns found in the comments section…”

Trump’s account remains suspended, and the platform has indicated that it will not reinstate the channel anytime soon.

"’In light of concerns about the ongoing potential for violence, the Donald J. Trump channel will remain suspended,’" YouTube told USA TODAY at the time. “The suspension prevents the uploading of new videos or livestreams to the channel. Comments on the channel, which has nearly 2.8 million subscribers, are also disabled indefinitely.”

YouTube has been a long-time enemy of the former president. During the summer of 2019 alone, YouTube removed over 300 ads from Trump’s reelection campaign.