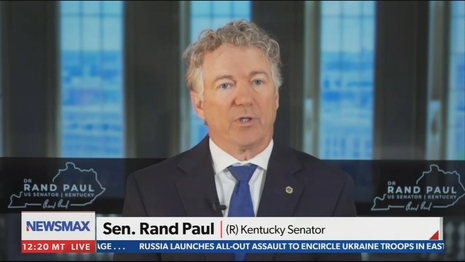 The U.S. government and Russia appear to be mortal enemies, but Paul said the Disinformation Governance Board (DGB) proves the Biden regime doesn't seem too different in its tactics to coerce the public.

“I’m hoping it’s gone and gone for good. They say it’s suspended, but whether or not it’s lurking in hibernation and is going to come rearing back, we don't know for certain,” Paul explained in a May 24 interview with Newsmax. “But what we do know is that when the government decides what disinformation is, it often has a secondary motive or a motive of trying to squelch, basically, the opposition.”

Right now in Russia, they have disinformation governance boards, and basically if you speak out against the war or say that there actually is a war, the government will come after you with some probably crazy woman like this woman they wanted to appoint in the Biden administration, and basically they have criminal penalties for disinformation.

He noted that the Biden administration tried to cloak its tyranny over American dissent by using Big Tech to act on its behalf. “The Biden administration would argue, ‘Oh we’re not going todo criminal penalties,’ this and that, but they have said that they would utilize Big Tech and Big Tech would serve as sort of the police of speech and the government would collect names, report them to them, and then Big Tech would respond.”

Paul suggested that a libertarian approach to Big Tech companies is no longer viable when Big Tech companies act on behalf of a totalitarian government: “I worry about Big Tech becoming an arm of the government, and as much as I’m for leaving them alone for the most part, if they begin to engage as a police or an arm of the government, it’s going to make them more and more open to the idea that perhaps their speech and their content and their ability to publish the content could likely come under a government review or regulation.”

Jankowicz played a huge part in destroying the board’s credibility because she had a history of spreading false information herself.

She spread false Trump-Russia collusion talking points ranging from the debunked Alfa Bank narrative from 2016 to praising a speech that parroted the debunked Steele Dossier. Critics often compared her short-lived board to the “Ministry of Truth” from George Orwell’s dystopian novel 1984.