Disinformation Governance Board leader Nina Jankowicz has a history of spreading false information herself.

The Disinformation Governance Board (DGB) leader Jankowicz spread false Trump-Russia collusion talking points ranging from the debunked Alfa Bank narrative from 2016 to praising a speech that parroted the debunked Steele Dossier. Critics often compare the censorship board under President Joe Biden’s Department of Homeland Security to the “Ministry of Truth” from George Orwell’s dystopian novel 1984.

Jankowicz retweeted false claims from then-candidate Hillary Clinton that then-candidate Donald Trump was coordinating with Russia through Alfa Bank. Jankowicz commented at the time that the claim “[c]onfirms our worst fears about Trump. I am horrified.” The narrative was completely debunked in following years. Even the left-wing Washington Post acknowledged the Alfa Bank narrative was bogus.

However, the article still attempted to theorize that the more “likely scenario” was that “the Trump Organization was using a third-party vendor to entice an Alfa Bank employee to visit a Trump golf club and the Alfa Bank server was responding by trying to figure out if this was a legitimate email or not.” 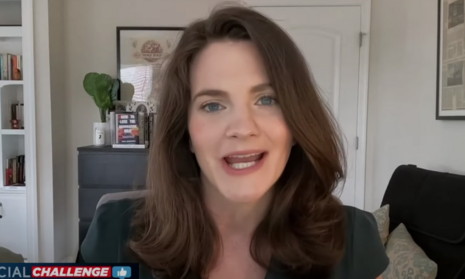 The Washington Examiner summarized that much of Schiff’s remarks “consisted of reading discredited dossier allegations into the congressional record, and he mentioned Steele six times.” Jankowicz responded by tweeting “Agree, and more importantly- explains why Congressional investigation into Trump-Russia ties is an integral part of our democracy.” [Emphasis added.]

The Examiner reported that Jankowicz directly cited debunked Steele Dossier claims in her 2020 book How to Lose the Information War: Russia, Fake News, and the Future of Conflict:

‘The extent of Russian influence over the U.S. election — and perhaps even the Trump campaign itself — was becoming clearer and more worrisome with each day that passed in the new young year,’ Jankowicz wrote of early 2017.”

Independent journalist Glenn Greenwald responded to the Examiner reporting on the incident by observing: “The people and institutions who scream the loudest about the need for the state and corporate giants to censor ‘disinformation’ are the ones who most aggressively and harmfully spread disinformation.” Greenwald added that the pattern was “like an unbending law of the universe.”

Retired U.S. Diplomat Alberto Miguel Fernandez quipped: “So head of now notorious #DHS #DisinformationGovernanceBoard was promoting disinformation online in 2016 and beyond. But it was the type of disinformation you get a pass for these days.”