Microsoft opened an event by apologizing to indiginous tribes of America on whose land their offices are built. No word on whether Bill Gates wants to actually return them.

Microsoft hosted Microsoft Ignite 2021 in a Nov. 2 broadcast and couldn’t wait more than 30 seconds to start spewing woke gibberish. After an initially cheerful greeting, Senior Program Manager Allison Weins declared, “First, we want to acknowledge that the land where the Microsoft campus is situated was traditionally occupied by the Sammamish, the Duwamish, the Snoqualmie, the Suquamish, the Muckleshoot, the Snohomish, the Tulalip, and coast Salish peoples since time immemorial.” She noted further those peoples are “still here, continuing to honor and bring to light their ancient heritage.” It appears that the secret to having Big Tech companies actually respect ancient traditions and culture is being born into a group liberals care about.

Weins continued by explaining she is “an Asian, white female with dark brown hair, wearing a red sleeveless top.” Her co-host AI Platform Program Manager Seth Juarez responded in kind: “I am a tall Hispanic male wearing a blue shirt, khaki pants. Today we kick off two days of learning more about the latest solutions, exploring how these key innovations can empower you to do great things and connecting with peers from around the world.” 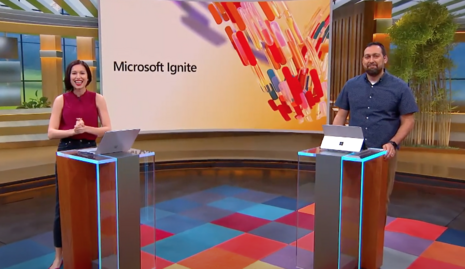 Atheist liberal podcaster and author Sam Harris commented via Twitter that “It seems like part of the rationale for this must be to help the visually impaired. But, whatever the intentions, this makes Microsoft look like the Cirque du Soleil of wokeness. Quillette Founding Editor Clarie Lehmann made a similar remark, asking, “Will wokeness contribute to the unwinding of globalisation? The rest of the world does not want these bizarre sectarian mind viruses exported to them.”

Microsoft also tweeted out video footage of a presentation in front of a virtual audience, because real audiences are a thing of the past apparently, inviting consumers to “Gain insights on how to react to security threats and prepare for the next frontier in identity proofing.” Gender and racial identity appeared to take center stage first, however. After introducing herself by name, Product Marketing Manager Natalia Godyla explained, “I’m a Caucasian woman with long blond hair, and I go by she/her,” only then explaining her position at Microsoft. Co-host of Security Unlocked podcast for Microsoft Nic Fillingham followed suit, alerting the audience that he is “a Caucasian man with glasses and a beard. I go by he/him, and I’m a Security Evangelist here at Microsoft.”

Conservatives are under attack. Contact Microsoft at 1-800-642-7676 and demand that Big Tech mirror the First Amendment while providing transparency, clarity on “hate speech” and equal footing for conservatives. If you have been censored, contact us at the Media Research Center contact form, and help us hold Big Tech accountable.