The massive shakeup of modern politics continues as a rapper condemned political tribalism and censorship. Minaj made headlines when she expressed concern about the risks of taking a COVID-19 vaccination shot on Monday, cautioning her followers “pray on it” and to “make sure you’re comfortable with ur decision, not bullied.” On Wednesday, she posted an Instagram story claiming, “I’m in Twitter jail y’all. They didn’t like what I was saying.” Twitter has reportedly denied that the platform took action against her account.

Minaj faced backlash from Twitter users for expressing skepticism over COVID-19 vaccination and for sharing a clip from Carlson. Minaj shared a tweet with a bullseye, presumably as an endorsement, of Carlson praising her post for encouraging Americans to think for themselves. Carlson observed in the video how “our media and public health officials didn’t like this because they make their living bullying people.” 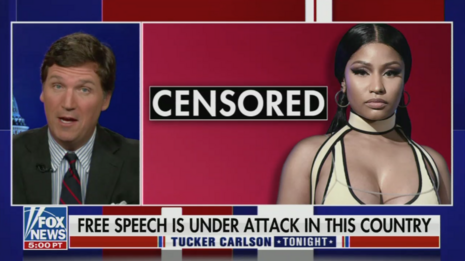 Right. I can’t speak to, agree with, even look at someone from a particular political party. Ppl aren’t human any more. If you’re black & a Democrat tells u to shove marbles up ur ass, you simply have to. If another party tells u to look out for that bus, stand there & get hit.

Video and audio emerged, of what appears to be Minaj, condemning Cancel Culture. Minaj purportedly said, “you can't speak for fear of the mob attacking you” and suggested that America was becoming more like Communist China:

I remember going to China, and they were telling us, you know, you cannot speak out against, um, you know, the people in power there, etc. And I remember all of us thinking: “Oh, OK. Well, you know, we understand, and we respect the laws here. And, you know, that it’s so different where we live.” But don’t y’all see what’s fucking happening? Don’t y’all see that we are living now in that time?

In a broadcast still viewable on her Instagram, Minaj condemned political partisanship in modern America. “If I wanna ask questions about the vaccine, what’s wrong? What’s wrong?” she asked. Later, she went a step further and admonished her followers: “Don’t tell me I can't agree with a Republican, or I can’t agree with this person.”