Update: This is a rapidly developing story. "Twitter locked President Trump out of his account for the first time late Wednesday," The Washington Post reported after 7 p.m. Wednesday. The Post also claimed, "The 12-hour timeout also included the removal of three tweets and a warning that Trump could be subject to a permanent suspension" if he continues to contest the election's legitimacy.

Update: According to Washington Post tech reporter Cat Zakrzewski, Trump’s call for peace has since been removed completely from multiple platforms. Zakrzewski announced that “Twitter just removed some of the president’s tweets, following Facebook and YouTube.” She announced earlier in the evening that “YouTube has also removed Trump’s video, though it will leave up copies with additional context.”

President Donald Trump’s call for order was restricted by Twitter, as chaos erupted in the nation’s capital.

Rioters stormed the capital on January 6 and Trump responded with a short video posted to Twitter that called for peace and an end to the protest. He assured his supporters, “I know your pain. I know your hurt,” but told them “you have to go home now. We have to have peace.” President Trump also assured his supporters that he agrees the election was “fraudulent,” but warned “we can’t play into the hands of these people.” The tweet was promptly labeled with a warning: “This claim of election fraud is disputed, and this Tweet can’t be replied to, Retweeted, or liked due to a risk of violence.”

The “risk of violence” claim was especially bizarre since Trump made it clear he was calling for “peace” and urging the protesters go home. Trump’s post on Facebook was similarly labeled: “The US has laws, procedures, and established institutions to ensure the integrity of our elections.” At least Facebook didn’t treat a call for peace as a “risk of violence.” 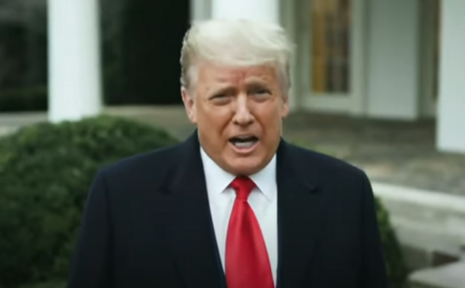