Facebook is blatantly interfering in elections by banning the ads of a Republican congressional candidate.

“Facebook has reportedly banned all ads on behalf of Laura Loomer, the frontrunner in the GOP primary race for House candidate in Florida’s 21st district” Breitbart reported on July 3. The article noted how her personal accounts have been banned from Facebook and Instagram, her political campaign has been restricted from creating an account or even buying advertisements.

“I’m the only federal candidate in the nation banned from advertising on Facebook,” Loomer observed. She added adding that “My competitor, Lois Frankel is running ads on Facebook to reach voters, and my campaign is shut out.” She then declared that Facebook’s moderation here is a case of “illegal election interference.” 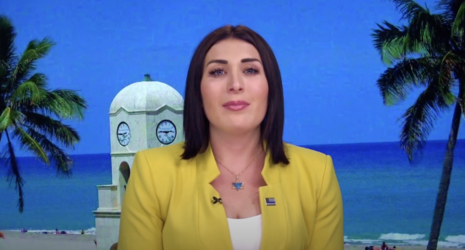 Facebook purged Loomer among a handful of other controversial political figures’ accounts in May 2019, A Facebook spokesperson commented at the time that “We’ve always banned individuals or organizations that promote or engage in violence and hate, regardless of ideology." Loomer made a name for herself as a Jewish-American right-wing provocateur whose performance art and protests resulted in having multiple Big Tech and payment processing platforms blacklist her.

The New York Post explained that GOP strategists, activists and donors increasingly view Loomer as “the conservative answer to New York Rep. Alexandria Ocasio-Cortez” and that “Team Loomer said they expect to blow out the crowded GOP field in the Aug. 18 primary”

“I am a one-woman squad,” Loomer told The Post, “Republicans need more firepower. They need people who aren’t going to cower in fear of these women.”

Loomer’s following was reportedly massive. In an interview on Josh LeKach’s show, Wrong Opinion, Loomer claimed that she had “265,000 followers on Twitter” and that metrics indicated she “was reaching 150 million” impressions per month. As of right now, even on the new platform parler, she has over 599 thousand followers.

Loomer also told Breitbart “Facebook is giving illegal in-kind contributions to my opponent” and demanded that the platform “reverse course or even the playing field by banning my competitor from advertising.” Loomer called for Americans to actually be consistent with their values on fairness in elections:

“If the idea of banning Lois Frankel from advertising on Facebook outrages you, you should be equally outraged over the fact that my campaign is universally deplatformed and is being denied equal access to run ads on Facebook.”

Conservatives are under attack. Contact Facebook headquarters at 1-650-308-7300 or 1-650-543-4800 and demand that the platform provide transparency: Companies need to design open systems so that they can be held accountable, while giving weight to privacy concerns. If you have been censored, contact us at the Media Research Center contact form, and help us hold Big Tech accountable.