Big Tech and the news media have once again revealed that liberals can’t take a joke. A video tweeted by Donald Trump parodying CNN coverage has been labelled by Twitter as manipulated media.

President Donald Trump tweeted a Carpe Donktum video depicting a fake CNN headline that states, "TERRIFIED TODLER [sic] RUNS FROM RACIST BABY," with footage of an African-American toddler being chased by a white toddler in the same direction as seemingly ominous music plays. This is followed by a clip of "WHAT ACTUALLY HAPPENED," which featured the same two children “running toward each other on a sidewalk before embracing as Harry Connick Jr.'s version of the Carpenter's ‘Close to You’ plays,” NBC News summarized. 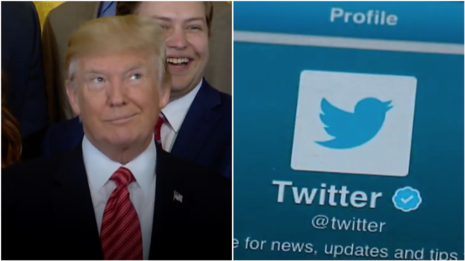 The video ends by claiming that "AMERICA IS NOT THE PROBLEM," and instead suggests that "FAKE NEWS IS." The video then featured a call to action: "IF YOU SEE SOMETHING, SAY SOMETHING," and proclaimed that "ONLY YOU CAN PREVENT FAKE NEWS DUMPSTER FIRES."

While the video is clearly intended as a hyperbolic parody of liberal media coverage, Big Tech and liberal journalists are taking it with utter seriousness.

“Multiple journalists confirmed that the video, which was shared by President Trump, is edited and features a fake CNN chyron. The original CNN story, which is from 2019, reported on a friendship between two toddlers.”

The parody video also included meme creator Carpe Donktum’s twitter handle as a watermark on the lower right hand corner. NBC described Donktum as a “Trump-supporting creator who has made other manipulated content.”

CNN responded to Trump’s post by tweeting, "CNN did cover this story — exactly as it happened. Just as we reported your positions on race (and poll numbers). We'll continue working with facts rather than tweeting fake videos that exploit innocent children. We invite you to do the same. Be better."

CNN chief White House Correspondent Jim Acosta condemned Trump’s style of tweeting humorous political videos in a tweet responding to another clip: “Straight out of 1984... This Trump tweet is not only bizarre. It’s bogus. I never did a live shot on this so obviously the chyron is a fake.”