Snap leadership’s decision to stop President Donald Trump from being able to promote himself on the Snapchat platform may be just the ripe first target for Sen. Josh Hawley’s proposed legislation.

“We’re well within our First Amendment rights to decide what shows up,” Snap CEO Evan Spiegel explained to CNBC’s Power Lunch. Spiegel then cited that the First Amendment is written to “protect individuals and private businesses from the government.” What he failed to mention was that Section 230 protections are themselves a form of government regulation that can be changed. 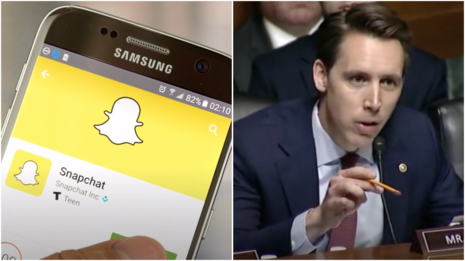 Snap had proclaimed just last week that it will no longer allow the president of the United Stated to access the same tools allowed for celebrities and other favored influencers on the platform to reach youth.

This comes after the Missouri Republican senator and Congressman Matt Gaetz (R-FL) each announced in late May that they were both working on legislation to crack down on Big Tech’s hypocritical misuse of Section 230 protections while failing to act as platforms for free speech.

Axios also explained how damning this legislation would be for hypocritical Big Tech platforms: “The legislation would open platforms to legal liability if they enforce their terms of services in unequal or uneven ways, including by making politically motivated moderation decisions.”

The legislation is reportedly coming very soon and already is being circulated:

“Hawley and his office have had multiple conversations with senior White House and Justice Department on revisiting Section 230, the source said. They have shared draft text of the measure with other Senate offices seeking cosponsors, and the bill could be introduced as early as next week.”