A leaked demo revealed a new system that may change the way Twitter users get information on the platform. 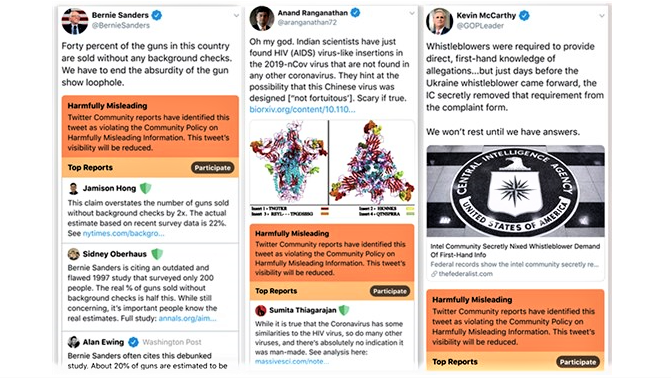 The NBC report revealed “disinformation or misleading information posted by public figures will be corrected directly beneath the tweet by fact-checkers and journalists who are verified on the platform.” Common users may also have some power to fact-check, reported NBC News, as there may be a “community reports” feature, which the demo compared to Wikipedia.

The leaked demo showed examples of tweets that would be highlighted as “harmfully misleading,” including one post by Sen. Bernie Sanders (I-VT) about background checks for firearms, one about the coronavirus being manufactured in a lab, and a third from GOP congressman Kevin McCarthy (R-CA).

NBC News tweeted how these will blast every users’ timeline with unmissable warnings,

“The leaked demo features bright red and orange badges for tweets that have been deemed ‘harmfully misleading,’ in nearly the same size as the tweet itself and prominently displayed directly below the tweet that contains the harmful misinformation.”

One Twitter spokesperson who came forward explained how “We’re exploring a number of ways to address misinformation and provide more context for tweets on Twitter,” before later adding that “Misinformation is a critical issue and we will be testing many different ways to address it.”

One iteration of the demo added a potentially critical aspect: Twitter users could be able to earn “points,” or even a “community badge,” if they “contribute in good faith and act like a good neighbor” by providing “critical context to help people understand information they see.”

The demo explained: “Together, we act to help each other understand what’s happening in the world, and protect each other from those who would drive us apart.”

Twitter has been ramping up its war on “misinformation” leading up to the election for a while now, even going so far as to stop all political advertising on the platform. But after a fearful outcry from the left that Twitter’s ad ban would remove “climate change” ads among other liberal fan favorites, Twitter decided to make an exception for some “caused-based” ads. Twitter also declared in January that “You may not deceptively share synthetic or manipulated media that are likely to cause harm. In addition, we may label Tweets containing synthetic and manipulated media to help people understand their authenticity and to provide context.”