An Antifa-related activist group called “All Out DC” has been putting up posters with the personal information of Fox News host Tucker Carlson, as well as other free speech figures, in an effort to “Block the Alt-Right.”

The group’s poster announced an upcoming rally on July 6 along with Carlson’s face and personal information. The caption labeled him as a “racist with a huge following and platform” who “uses it to promote racist dogwhistles.”

Carlson’s home has been targeted by far-left activists before. In November 2018, a small crowd of Antifa activists rallied outside his D.C. residence chanting phrases such as  “Tucker Carlson, we will fight. We know where you sleep at night!” 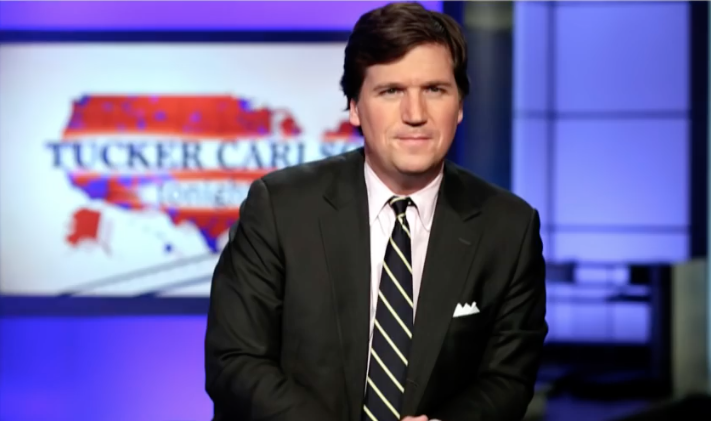 A photo of this poster was posted by All Out DC’s Facebook page. Later, it was removed by Facebook. The All Out DC group itself however is still allowed on the platform. Facebook is very clear in its Community Guidelines that users “should not post personal or confidential information about others without first getting their consent.”

Twitter, however, appears to have taken minor action. According to a tweet by OANN correspondent Jack Posobiec, “Twitter has suspended Antifa DC’s new account @AllOutDistrict after I exposed them for posting Tucker Carlson’s home address and targeting various high-profile conservatives.” Shortly afterward, the suspension ended with the account back online.

After getting its account back, All Out tweeted:“It's amazing to see so many racists attempt to silence our #FreeSpeech on Twitter. It's almost like they believe it is only meant their fascist views.”

Carlson is a well-liked figure in mainstream conservative politics. All Out DC has used similar hyperbolic rhetoric about President Trump, writing in a recent Facebook post that his proposed ICE arrests of illegal immigrants makes him an “ethnic cleanser.” As noted by Posobiec, All Out DC also revealed the home address of U.S. Senior Advisor Stephen Miller.

As USA Today wrote in 2018, Carlson said that far left activists broke his door in their 2018 attack. The security video caught one of the activists mentioning a pipe bomb. Carlson’s wife Suzie who was at home by herself that evening, locked herself into a pantry and called police.

“I have four children,” Carlson said in response. “I never thought twice about leaving them home alone, but this is the reaction because this group doesn’t like my TV show.”