When asked for their reaction to a Media Research Center (MRC) study that showed how freely Facebook lets Chinese state-controlled media push propaganda on its platform Rep. Ken Buck (R-CO) and Sen. Ted Cruz (R-TX) scolded the social network for its hypocrisy and censorship. “We must break up Big Tech,” Buck said. Cruz appeared to agree, suggesting that Facebook’s behavior is “outrageous” and that it has been giving a “free pass” to Chinese Communist Party propaganda. 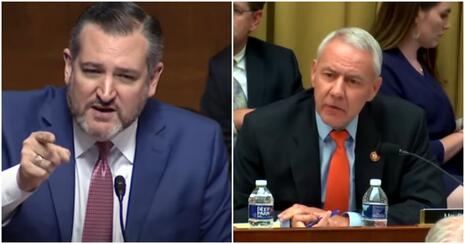 “Facebook has de-platformed the President of the United States, censored the New York Post’s accurate reporting on Hunter Biden and information on the origins of COVID-19,” Buck told the MRC. “However, they are allowing Chinese propaganda to thrive on their platform.”

Cruz also lit into Facebook. He told the MRC that “Facebook has lost all credibility when it comes to fact-checking and elevating the truth.”

Facebook has let 40 accounts run by Chinese propaganda outlets acquire a following of over 751 million users on its platform. China has restricted its own citizens from using Facebook, which makes the massive following amassed by Chinese propaganda accounts alarming. An AP-Oxford Internet Institute investigation showed “for the first time that large-scale inauthentic amplification has broadly driven engagement across official government and state media accounts, adding to evidence that Beijing’s appetite for guiding public opinion — covertly, if necessary — extends beyond its borders and beyond core strategic interests, like Taiwan, Hong Kong and Xinjiang.”

Cruz criticized Facebook for allowing communist China to push misinformation on the platform about its human rights violations against Uyghurs, while simultaneously censoring the 45th president of the United States.

“Facebook continues to give a free pass to the Chinese Communist Party’s state media accounts that peddle absolute lies, including about the Uyghurs, who the Chinese Communist Party has put in concentration camps,” Cruz told the MRC. “In America, Facebook has positioned itself as the arbiter of truth and political speech. They have banned a former leader of the free world, President Trump, and censored Americans who dared to wonder if the COVID-19 virus escaped from a Chinese lab.”