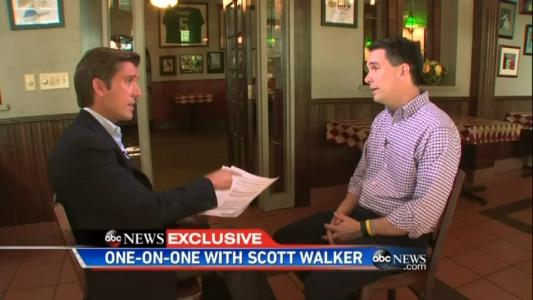 On Monday night, the major broadcast networks were out in full force to go after Republican Governor Scott Walker (Wisc.) during his 2016 presidential announcement for his stance on illegal immigration, “no foreign policy experience,” and comments about union protesters along with an urging by ABC’s David Muir to criticize fellow presidential candidate Donald Trump.

ABC’s World News Tonight anchor David Muir scored an exclusive interview with both Walker and his family and, like his interview with Jeb Bush, Muir neglected to even mention issues such as the economy, distrust in government, and ObamaCare.

While he skipped those topics, Muir pressed Walker to attack a fellow candidate in Trump concerning his illegal immigration stance and specifically whether he agreed with Jeb Bush:

There are a lot of people are talking about Donald Trump right now. He's leading in some polls in the Republican field. Jeb Bush has said that he believes what Trump has said about Mexicans is really meant to inflame and incite. Do you agree with that?

When Walker passed on taking shots at Trump, Muir persisted: “Eventually, though, you could very well be on the debate stage with Trump and if he says on that stage what he's said about Mexicans, what would do you say to him?”

Muir continued on the issue of illegal immigration by demanding to know what Walker will do with the millions of illegal immigrants already in the U.S.: “And what do you do, Governor, with those 11 million undocumented immigrants? Do you send them home?” 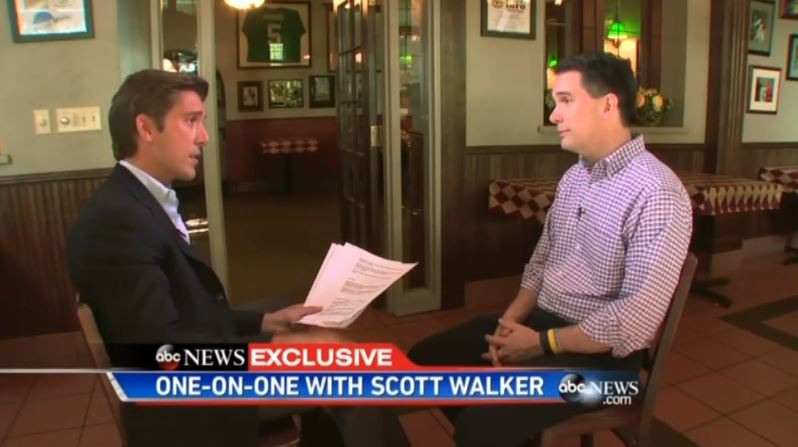 Shifting gears, Muir brought up Walker’s comments about ISIS and union protesters during his CPAC speech on February 26:

The remainder of the nearly five-and-a-half-minute segment harped on the split in the Walker family concerning gay marriage with Governor Walker remaining opposed to the Supreme Court’s June 26 decision while his wife and two sons supported it. Following the interview, Muir devoted a 13-second news brief to Hillary Clinton’s economic speech earlier on Monday in which she attacked Walker for “stomping on worker's rights.”

Covering the Walker announcement for NBC Nightly News, Capitol Hill correspondent Kelly O’Donnell explained that he spent “[m]ore than half his life” “in public office” and “stumbled” in February “when he compared that fight to global terror threats.”

She further described Walker as joining “a record-sized field with Donald Trump's combustible record on immigration” and having “stumbled” at CPAC “when he compared that fight to global terror threats.” Before tossing back to anchor Lester Holt, O’Donnell knocked Walker both on foreign policy and dealing with criticism:

[D]espite his potentially broad appeal across different parts of the Republican Party, as Governor, Walker has no foreign policy experience and he has yet to be tested under the kind of scrutiny you get on the presidential level of politics. Those will be his challenges as he begins a week-long rollout in four key states.

After he raised “questions” on CBS This Morning about Walker’s “readiness for prime time,” correspondent Dean Reynolds returned on the CBS Evening News for more by highlighting how “[h]e aroused huge opposition to limiting the bargaining power of unions” before footnoting that Walker prevailed. 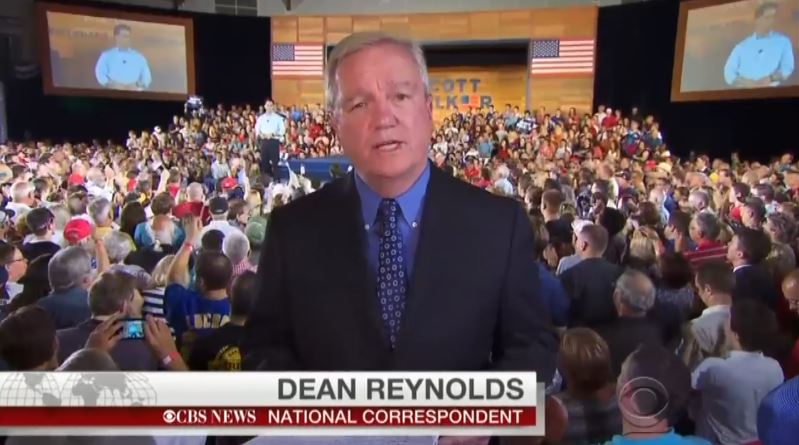 Prior to touting a soundbite from Hillary Clinton attacking Walker hours before his speech, Reynolds signaled out a few of Walker’s conservative policy positions: “He's signed tougher voter I.D. laws, rejected Medicaid expansion under the Affordable Care Act and is now pushing for a constitutional amendment to give states the right the ban same-sex marriage.”

Reynolds closed with a nod to “a very supportive crowd” on hand for the announcement, but not without bringing up his ISIS comments: “Now, Walker's own words have occasionally got him into trouble, like the time he compared union protesters to ISIS terrorists.”

On the country’s top Spanish-language networks, however, the story of Walker’s announcement was largely ignored as MundoFox and Univision made no mention of him on their Monday evening newscasts. Telemundo did cover Walker’s campaign launch, but did so only in a news brief.