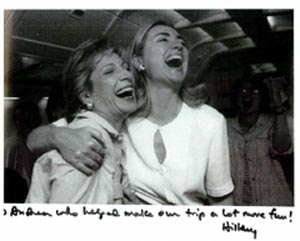 When it comes to media coverage of the 2016 presidential election, not only is it safe to expect the liberal media to fawn over Hillary Clinton, but one can also expect them to congratulate each other on the job they’re doing. For evidence of this, look no further than a glowing profile from Politico on Wednesday about NBC News correspondent and MSNBC host Andrea Mitchell.

In a piece entitled “Hillary Clinton’s Rope-Line Antagonist,” reporter Hadas Gold began the profile by touting Mitchell as “a veteran of the Clinton beat” and “one face and voice in particular [that] stands out” among “the usual scrum of reporters crowded around Hillary Clinton.”

As the person who will “spearhead” NBC’s “Clinton coverage for 2016,” Gold gushed [emphasis mine]:

Mitchell, 68, is back on the trail, acting more like a cub reporter hungry for her first scoop than a star television journalist with her own show or a Washington insider married to former Federal Reserve Chairman Alan Greenspan. She’s one of the most senior reporters covering the race, and one of the most aggressive, calling Clinton out, chasing her down, asking her questions — and occasionally getting a roundabout answer. Some sources suggest she’s getting under the Clinton camp’s skin, a rope-line irritant constantly shouting after the former secretary of state to answer questions. For Mitchell, it’s second nature.

Later on, New York Times reporter Amy Chozick chimed in to provide her own take on Mitchell: “Man, do I admire her...Way too often journalists get rich and famous and stop doing the shoe-leather reporting that got them there in the first place, but Andrea is a workhorse yelling questions on the campaign trail with the rest of us.”

The Politico reporter closed by invoking Clinton’s 1995 trip to Beijing which Mitchell covered for NBC and her supposed reputation in the eyes of Clinton Press Secretary Amy Caputo:

Mitchell, Caputo wrote, wasn’t a “Hillary fan” but one to contend with: “Andrea Mitchell, NBC — Former White House correspondent. She was replaced by Brian Williams, whom NBC is grooming to take over for Tom Brokaw. Andrea now covers the State Department. She is very aggressive and a very good reporter.”

Interestingly, what Gold neglected to mention was that the trip produced the infamous photo (seen at the top of this post) of Clinton and Mitchell smiling and hugging each other that was later signed by Clinton and included in Mitchell’s autobiography.

The whole idea that Mitchell is any sort of fair and independent journalist makes little sense when you look at her reporting on the campaign and bombshell book Clinton Cash alone.

>> Find all of NewsBusters‘ coverage of Andrea Mitchell here <<

On April 30's Today, Mitchell declared that the former First Lady is “not afraid to run as her own woman” by distancing herself from policies dating back to her husband Bill’s administration. Regarding Clinton Cash, Mitchell tried to downplay the book’s allegations as having “a lot of holes” on the April 24 edition of her MSNBC show:

But truth be told, having gone through it last night once we got the book yesterday, there are a lot of holes. There is the question of, how do you connect the policy that she was pursuing as a Secretary of State with the allegation that money was being contributed to the charity or speeches were being booked for Bill Clinton that wouldn't have otherwise been booked? You know, the timing may be fortuitous or suspicious or coincidental, but you can't make that connection in a lot of cases.

In stories for April 23's NBC Nightly News and April 24's Today, she turned to an expert from a George Soros-funded organization to dismiss the Clinton Foundation scandal (who later reversed his position).