The CBS Evening News enthusiastically took to promoting ObamaCare in the form of a brief on its Monday night broadcast, hailing the fifth anniversary of President Obama signing the massive legislation into law. Anchor Scott Pelley began by reminding viewers that “[i]t was five years ago today that President Obama signed the Affordable Care Act known as ObamaCare.”

Continuing the White House spin, Pelley rattled off a few statistics regarding the health care law that he claimed were from “[o]ur research department,” starting with how “more than 16 million Americans have health insurance who didn't have it before.”

Turns out, if one examines the on-screen graphic accompanying the statistic carefully, one will notice that the real source comes from none other than the White House. On March 16, the Department of Health and Human Services (HHS) issued a two-page sheet of talking points regarding the so-called successes of ObamaCare and included that very claim.

While the liberal media may be following the White House claims, a post from Edmund Haislmaier at The Daily Signal on Monday examined how the number of Americans with health insurance is likely far less than the Obama administration would have you believe.

Turning to a stat from the U.S. Census Bureau, Pelley also reported that “number of uninsured Americans has dropped from about 50 million to 26 million.”

While Pelley was busy gushing over this date in history, he did broach the topic of how a majority of Americans still oppose ObamaCare: “In our CBS News poll in February, 52 percent said they didn't approve of ObamaCare. 44 percent said they did approve. 32 percent wanted to repeal it. 60 percent thought it had done good things but needed changing.”

In the final part of the 44-second news brief, Pelley advanced the assertion that “[t]he Republican-controlled House has voted 56 times to dismantle ObamaCare in these five years.”

As was the case with the White House stat earlier, Pelley again neglected to tell the whole story. While media figures such as Pelley have made that claim over the last year, The Washington Examiner’s Byron York wrote on March 15 how much of this “truism isn’t true” [emphasis mine]:

The House has actually voted to repeal Obamacare in its entirety six times. Certainly Democrats think that is six too many. But it is not 50, or even close to 50. The rest of the votes – there have actually been 54 so far – were votes that ranged from defunding measures that would have crippled Obamacare to delaying measures that would have put off some of the very same provisions in the law that President Obama has delayed unilaterally, to measures fixing portions of the law that passed both houses of Congress with bipartisan support and were signed by the president.

The basic story is that House Republicans have voted for repeal at a few key moments since Obamacare was signed into law, and also as part of the yearly budget process. “It's six times if you count the budget,” says one House GOP source in an email. “First time was when we first took the House majority, once after the Supreme Court decision, and once this Congress. And then the budget ever year.”

In addition, eight of the times Republicans have voted to “repeal” Obamacare have been instances in which Congress passed, and President Obama signed, for example, measures to repeal the 1099 tax reporting requirement; repeal the CLASS Act; reduce funding in the Prevention and Public Health Fund, which many lawmakers viewed as excessive; and other issues.

Of the other 40 or so anti-Obamacare measures passed by House Republicans, some were clearly efforts to gut the law while not actually repealing it. For example, in 2011 a measure known as the Rehberg Amendment, after former Rep. Denny Rehberg, would have “prohibited funding for any employee, officer, contractor or grantee of any department or agency funded under Labor & HHS to implement the health care provisions of Obamacare.” Other measures would have forbidden funding for implementing the Obamacare exchanges, or for implementing the Independent Payment Advisory Board. Other measures would have repealed IPAB altogether. Or prevented the Internal Revenue Service from enforcing the law.

The news brief from the CBS Evening News with Scott Pelley on March 23 is transcribed below.

[ON-SCREEN HEADLINE CAPTION: In the Race] 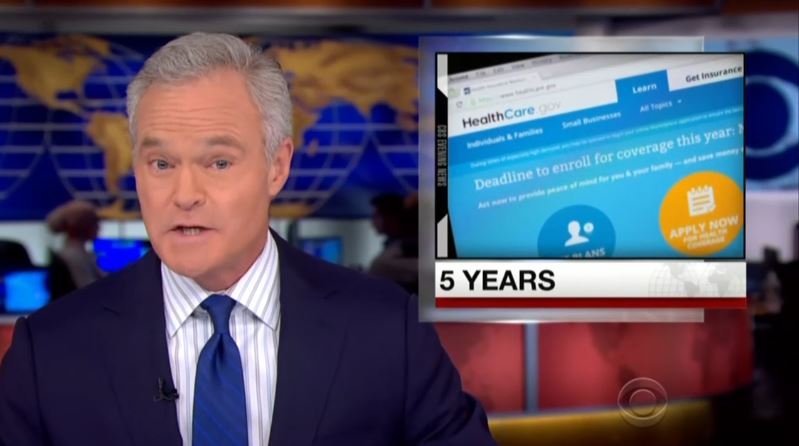 SCOTT PELLEY: It was five years ago today that President Obama signed the Affordable Care Act known as ObamaCare. Our research department tells us more than 16 million Americans have health insurance who didn't have it before. The number of uninsured Americans has dropped from about 50 million to 26 million. In our CBS News poll in February, 52 percent said they didn't approve of ObamaCare. 44 percent said they did approve. 32 percent wanted to repeal it. 60 percent thought it had done good things but needed changing. The Republican-controlled House has voted 56 times to dismantle ObamaCare in these five years.