FNC’s Goldberg, Krauthammer Blast Brian Williams; ‘Special Kind of Lie’; ‘Stuns Me’ ‘How Dumb This Is’

Fox News contributors Bernard Goldberg and Charles Krauthammer appeared on separate Fox News Channel (FNC) programs on Thursday to weigh in on the controversy surrounding NBC Nightly News anchor Brian Williams severe case of lying with Goldberg declaring it “a special kind of lie” Williams committed and Krauthammer remarking that “what stuns me is how dumb this is.”

Goldberg appeared first on The O’Reilly Factor and compared what Williams said in lying about being shot down over Iraq and Goldberg hypothetically claiming that he once “played centerfield for the New York Yankees,” “hit 536 lifetime home runs” and “played in 12 World Series.”

While he stated his belief that he doesn’t think Williams “is delusional,” he did diagnose what Williams did to be “not the usual lie” or “run of the mill lie” but rather “a special kind of lie.”

Expanding upon that point, Goldberg further defined the NBC News personality’s transgression to “the celebrity lie” which originated from the habit celebrities posses when they “go on television every night of the week” and “lie” because “they have to be entertaining and they know that the truth isn't always all that interesting.”

After saying on Thursday night that this story “will come to nothing” and blow over shortly due to the rapidly changing news cycle, Goldberg admitted on his website Friday morning that he “was wrong.”

Upon seeing a story regarding Williams on the front page of “the Bible in the world of journalism” in The New York Times as well as ariticles in the New York Post and New Orleans Advocate, Goldberg declared that: “Blood is in the water. The sharks are circling. As they say on television: Stay tuned.”

Two hours later on Thursday, Krauthammer joined Sean Hannity’s program and was asked about what he thought of the matter. Krauthammer responded by saying that “this is a big mistake on his part” considering “you’d expect a politician to lie and not a broadcaster.”

He continued by adding: “[W]hat stuns me is how dumb this is. If you're going to make up a story, well you do it when there aren't other people around.”

The Things That Matter author then gave a humorous (but arguably rather legitimate) example of a story that someone looking to get away with lying should tell: “You know, you tell a story about wrestling a lion to the ground because, generally speaking, lions don't have access to the internet, but you don't do it about an event that everybody saw.”

The relevant portion of the transcript from FNC’s The O’Reilly Factor on February 5 can be found below. 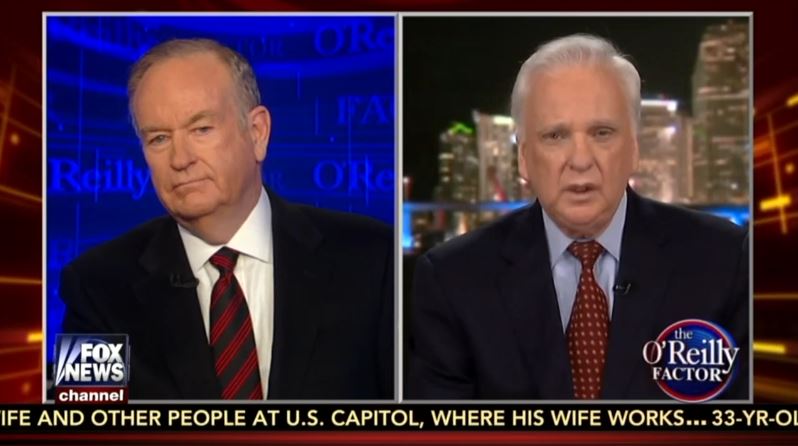 BILL O’REILLY: What do you think about the Williams situation?

BERNIE GOLDBERG: Let me answer it slightly differently than the last segment. You know that segment that you do on this show, “did you know that” where you bring people in who are now on Fox and –

O’REILLY: Yeah, we got that coming up right after you.

GOLDBERG: Okay. So you find out that somebody was a flight attendant or somebody was a standup comedian. Let's just imagine and, stay with me on this, Imagine I was on that segment and I said well, before I became a news analyst at Fox, I played center field for the New York Yankees. I hit 536 lifetime home runs and you know, just like Mickey Mantle interestingly, and I played in 12 World Series. Well, I would either be delusional, which is a mental illness, or I would be lying. I think those are the two options that apply to Brian Williams. I don't think he is mentally ill, so I don't think he is delusional, but if he lied and I suspect he did, it's not the usual lie. It's not the run of the mill lie. It's what you alluded to in the last segment. It's a special kind of lie. I’ll call it the celebrity lie. Celebrities go on television every night of the week, usually on the late night shows and they lie. They say such and such happened to them. It never did.  They make it up and the reason they make it up is because they have to be entertaining and they know that the truth isn't always all that interesting. 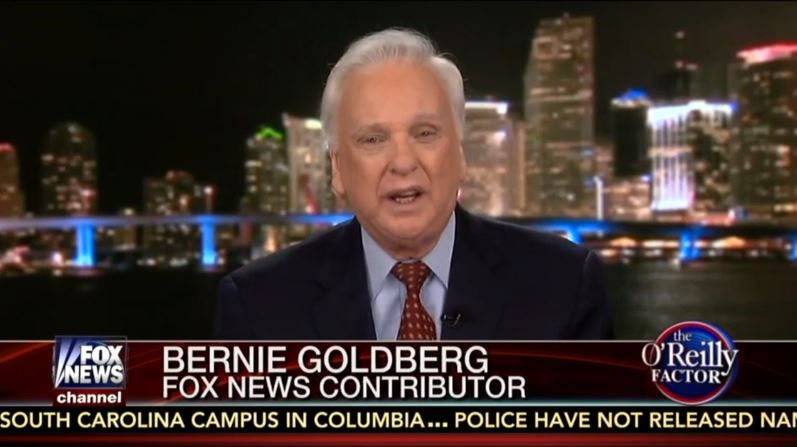 GOLDBERG: The problem is – and we don't care because there is, you know, some ditsy celebrity making up some ditsy story. Who cares? But when a news man whose also a celebrity cannot do that because when he does – when he does, you have to wonder what else he is making up, but I will say this in conclusion, I will say this – and I totally agree with you, this will come to nothing in a throw away culture that we live in. Nothing is news worthy for more than a day or two. When the Russians or their surrogates shot down a civilian airliner, do you know how terrifying that is? It was out of the news in a couple of days. This will be gone in the blink of an eye.

O’REILLY: And you don't expect NBC to do anything, right?

GOLDBERG: No, as a matter of fact, I expect them to – to passionately do nothing. If they issue a statement, it’ll be Brian Williams addressed this, next. No, I expect nothing. 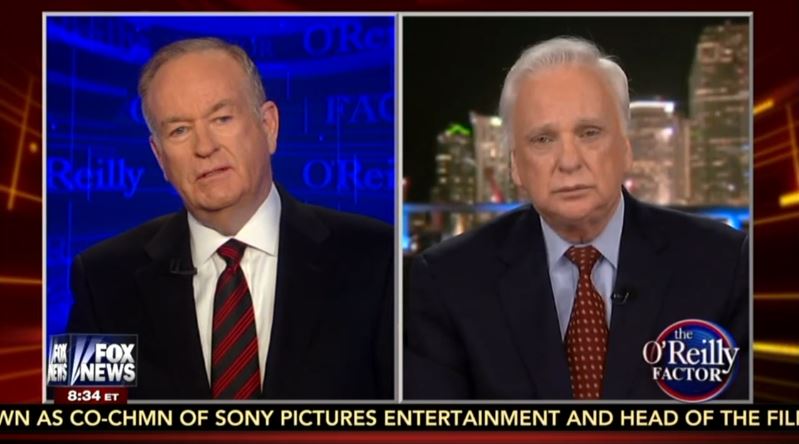 O’REILLY: Alright. You know, I – Gutfeld and McGuirk wanted to do –

GOLDBERG: Do you agree?

A portion of the transcript from FNC’s Hannity on February 5 is transcribed below. 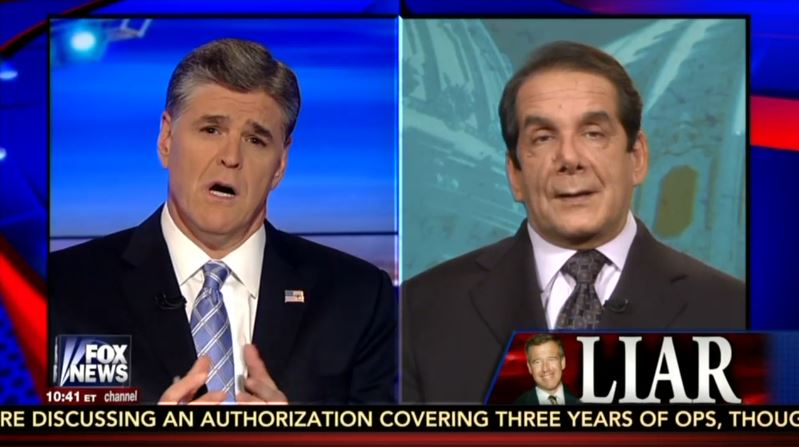 SEAN HANNITY: Let me transition and ask you, we work in the media business. You've been following the story of Brian Williams of NBC News?

KRAUTHAMMER: Look, this is a big mistake on his part. I don't like to pile on. I mean, all of us have embellished and once you start to embellish you're trapped in it and can't escape. Let's remember Hillary made up --

KRAUTHAMMER: – the story about being shot at in Bosnia.

KRAUTHAMMER: And she is the odds-on favorite to be the Democratic nominee for the presidency.

KRAUTHAMMER: Now, of course you’d expect a politician to lie and not a broadcaster, so I can understand the difference, but what stuns me is how dumb this is. If you're going to make up a story, well you do it when there aren't other people around. You know, you tell a story, about wrestling – 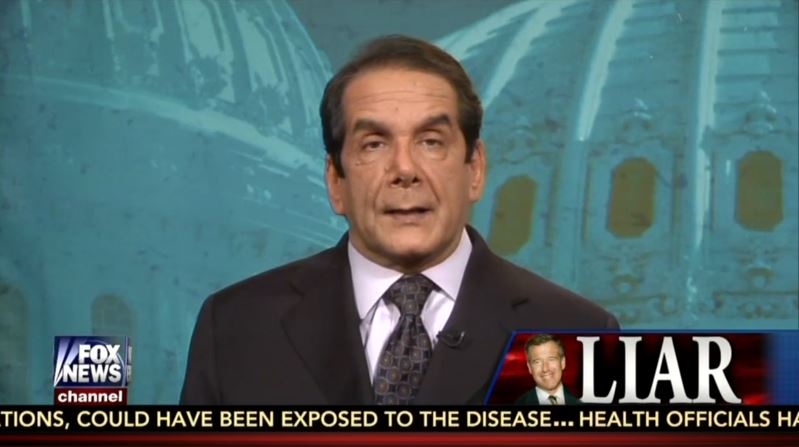 HANNITY: If you're going to tell a lie, don't have witnesses, is that what you're saying?

KRAUTHAMMER: Exactly. You know, you tell a story about wrestling a lion to the ground because, generally speaking, lions don't have access to the internet, but you don't do it about an event that everybody saw.

KRAUTHAMMER: And you know, in the end, you're going to be unmasked about it.