Ramos Hits Obama From the Left on Race; Wishes He Did More to Address ‘White Privilege’

Fusion/Univision anchor Jorge Ramos interviewed President Obama on Tuesdayand spent the interview flaunting his liberal beliefs by constantly hitting the President from the far left on a wide range of issues, including race.

After discussing the release of the so-called CIA “torture” report by Senate Democrats, President Obama was asked if he got “angry with” the belief that “many people expected you, probably, to do more on race relations, dealing with white privilege.” [MP3 audio here; Video below]

Just before that, Ramos lamented to the President that race relations in America have not improved because of three high-profile deaths of African-American men: “[T]he killings of Michael Brown and Eric Garner, Trayvon Martin, clearly shows that we don't even live in a post-racial society, as many expected when you were elected.”

He also wondered aloud to Obama if addressing race relations, including white privilege, should be his “responsibility” and was accompanied by the on-screen headline, which read: “Should President Obama Have done more to deal With race relations?”

When the President began to say that there’s no singular moment in “the history of race in America” when “suddenly, everything gets solved” and that he claimed that there has been “more equality” on his watch, Ramos appeared astonished: “So we’re doing better on race?”

Obama responded by bringing up the current generations of younger Americans and stated that “their attitudes absolutely are better when it comes to race,” but then, the unsatisfied liberal in Ramos pushed again: “But when they see Eric Garner, and they see Trayvon Martin, and they say, well, there’s no really a lot of improvement.”

A partial transcript of the segmented that aired on Fusion’s America with Jorge Ramos on December 9 is transcribed below. 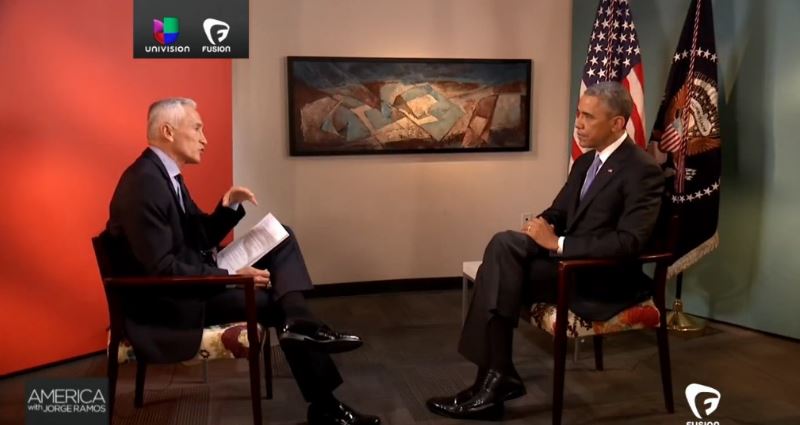 JORGE RAMOS: On another issue, the killings of Michael Brown and Eric Garner, Trayvon Martin, clearly shows that we don't even live in a post-racial society, as many expected when you were elected.

PRESIDENT BARACK OBAMA: Well, I didn't expect that. You probably didn't either, but – [LAUGHS]

RAMOS: But many people expected you, probably, to do more on race relations, dealing with white privilege. Do you get angry with this?

[ON-SCREEN HEADLINE: On Point; Should President Obama Have Done More to Deal With Race Relations?]

RAMOS: Is it your responsibility?

OBAMA: I think the criminal justice system is improved. I think that if you talk to younger people, your daughter, my daughters, their attitudes absolutely are better when it comes to race.

RAMOS: But when they see Eric Garner, and they see Trayvon Martin, and they say, well, there’s no really a lot of improvement.

[ON-SCREEN HEADLINE: On Point; Have Race Relations Really Improved Through the Years?] 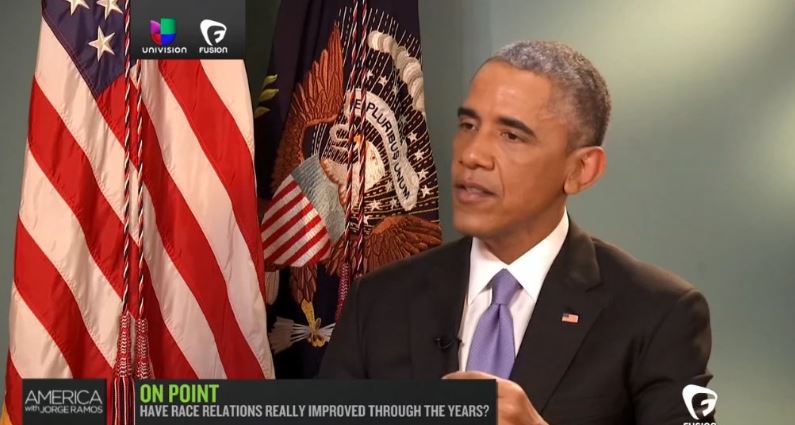 OBAMA: Well, but, you know, the – the folks who say there’s not a lot of improvement, I don’t think were living in the ‘50s and remember what it was like to black or Hispanic and interacting with the police then. They don’t even remember what it was like 20 years ago. There has been improvement. The question is, what more do we need to do and what’s clear when you look at some of the reports that have occurred around the country is that, not only is there still a lot of suspicion and mistrust between police officers and communities of color, but what’s also true is that there’s still instances in which a young black boy or brown boy is not being evaluated in terms of risk, precisely in the same way as a white young person might be by the police. Now, that, can be solved through better training, better accountability, better transparency, and so the task force we put together is designed to precisely this, but I think it is important to realize that, as we push to get on top of these issues around the country and nobody’s going to push harder than me because I’ve been subjected to these kids of misperceptions in the past.