Liberals made it a habit to harass justices outside their own homes in protest of the overturning of Roe V. Wade. Now they’ve taken it to the streets, as protestors “swarmed the front” of Morton’s in downtown D.C. where Justice Brett Kavanaugh was eating dinner, and forced him to leave through the back, per reporting by The Daily Caller July 8.

Kavanaugh was in concurrence with the Dobbs decision that defeated Roe in a 5-4 verdict. The decision, and the leaked draft opinion that began the outrage from the left, has roused the mob even further as they desperately try to defend their right to murder children. Kavanaugh, specifically, has been the target of protestors outside his house, and even an attempted assassination. Now he’s being harassed simply for eating dinner at a restaurant. 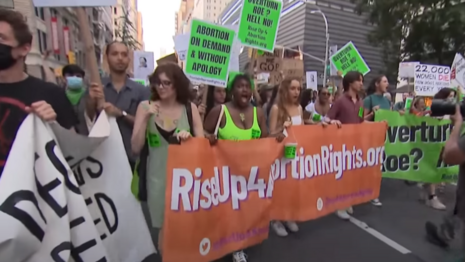 Politico reported that protestors showed up in front of Morton’s in downtown DC while he was eating dinner. The protestors reportedly “demanded that Morton’s kick Kavanaugh out,” per The Caller. Leftist organization ShutDownDC tweeted up a storm in the wake of the incident, encouraging more instances such as this:

We hear Kavanaugh snuck out the back with his security detail. @mortons should be ashamed for welcoming a man who so clearly hates women.

No rights for us, no peace for you. Get fucked @mortons https://t.co/xXWZ5JZiE7

DC Service Industry Workers... If you see Kavanaugh, Alito, Thomas, Gorsuch, Coney Barrett or Roberts DM us with the details!

We'll venmo you $50 for a confirmed sighting and $200 if they're still there 30 mins after your message. https://t.co/xXWZ5JZiE7

Leftists want to harass everyone that disagrees with them. They cannot win an argument because their ideas are garbage. Only evil people would do this.

A representative for Morton’s told Daniel Lippman of Politico that “Politics … should not trample the freedom at play of the right to congregate and eat dinner,” and that “Honorable Supreme Court Justice Kavanaugh and all of our other patrons at the restaurant were unduly harassed by unruly protestors while eating dinner at our Morton’s restaurant.”

Good to see that some people still have decency.

Morton’s stood up for Kavanaugh, and against the clearly mentally-disturbed protestors. The kinds of people that would take time out of their day to harass a justice are either mentally-ill, have too much free time, or a mixture of both.

You now have to be a social justice warrior to receive the Presidential Medal of Freedom under Joe Biden, so it makes sense for Megan Rapinoe to receive the award. pic.twitter.com/9QnQqfodNQ