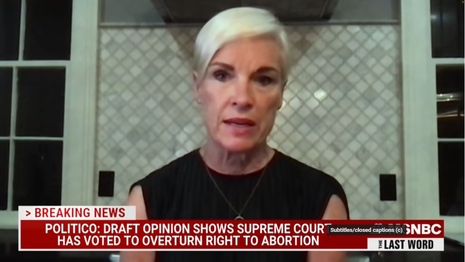 With the possible overturning of Roe v. Wade, the leftist mob has made it clear that, in the name of “healthcare,” they will fight any attempt to save the lives of the innocent. Richards, the veteran baby-killing apologist who now co-chairs Democrat Super-PAC American Bridge 21st-century, dusted off her old spiel and the fangirls at Teen Vogue rushed it onto their site.

In the letter, she says pro-life conservatives are willing to “trade away people’s lives for political power and control.” Her mob must “Get involved. Protest. Volunteer. Organize.” (As though they haven’t already.) Predictably, she posited abortion as a “right” for women that doesn’t infringe on the right to life of the child.

She implies that having access to abortion and living a full life are mutually exclusive. She says, “You have dreams: to go to college, play basketball, travel the world, open a bakery, climb Mt. Kilimanjaro, teach chemistry, go to outer space, act on Broadway,” as if women having dreams and working towards them is impossible if one has a child.

A baby, according to Richards, is not human life but an inconvenience to be neutralized. She roped into her letter other liberal causes such as climate change and college affordability in order to weave the multiple liberal narratives together into a monolithic cause that leaves zero room for nuance like most woke arguments.

The fight for the lives of the unborn won’t be over, as elites like Richards will continue to push back against attempts to save babies.