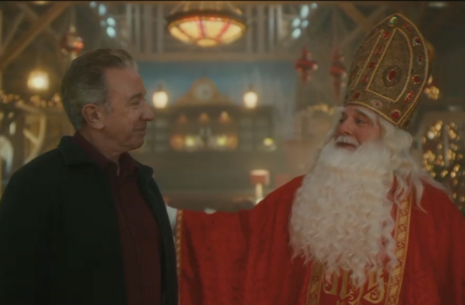 Disney is not even remotely shy in their bias towards the liberal causes. However, this holiday season they have surprisingly shown that there may still be some values within the major studio that haven't gone far-left, as demonstrated in the Disney+ original, The Santa Clauses.

The Santa Clauses is the newest edition to the popular Disney Christmas franchise. Tim Allen returns as the big man himself, Santa aka Scott Calvin, where he considers retiring in order to spend more time with his family.

However, in the fifth episode titled, “Across the Yuleverse,” the return of fan favorite elf Bernard (David Krumholtz) comes to show him the error of his ways. And during that time, viewers get an unexpected surprise.

For the first time in a while, Disney has opted to demonstrate the true origin of Santa Claus, by showing St. Nicholas of Myra, which is the origin of Santa. However, more importantly, he is a Catholic Christian saint. Refreshingly, Christianity is getting a proper representation in a Disney show, along with a proper representation of one of the main meanings of Christmas, which is hope.

This demonstration that Santa is a Christian, with his origins rooted in religion is fantastic. Disney is more known to showcase liberal concepts such as LGBTQ+ representation, racial hatred, communist ideas, etc. However, this show thus far is taking a more conservative turn. The show does nothing but emphasize how important traditions and families are, particularly during the holidays.

In short, Disney has come out with something completely wholesome. Maybe it’s a sign for change, or maybe it’s a one time thing. Either way, it seems that The Santa Clauses has somehow produced a Christmas miracle.