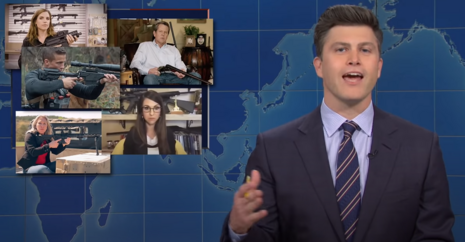 Jost insinuated blame on Republicans and their dislike of gun restrictions for recent gun violence. He referenced Biden’s calls for universal background checks for gun purchases. The president wants an assault weapons ban and background checks in response to the Boulder, CO, and Atlanta, GA, mass shootings, which occurred within the same week.

According to Jost “background checks are a great start.” He stresses however that "current checks" are as pressing, if not more: “How about this: If you want a gun, the gun store has to talk to at least five people from your life who agree it's a good idea for you to have a gun. It’s not really that much to ask.”

Jost defends his reasoning by saying, “You’ve got to list three references on an application to work at Foot Locker.” He also thinks it would be efficacious to monitor a potential gun buyer’s Instagram dm’s and make sure they are not incels, frustrated by poor response from the women they contact, or at least quantify how much Call of Duty they play on a daily basis.

He then transitions into an unfunny and stern critique of Republicans officials who should “just admit” that they "value guns more than people you don’t know” rather than pretend they are concerned about Second Amendment rights.

In order to prove such a ridiculous claim, Jost displayed images of Republicans like Marjorie Taylor-Greene and Madison Cawthorn posing with guns and likened them to political ads one would use if “running for president of ISIS.” He then mocked Republicans for their lack of concern for the “well-regulated militias part” of the Second Amendment. The bit was completed with a mention of the Capital Riot of January 6, saying, “And I don’t know if you noticed when they almost hung you two months ago, but our militias aren’t super well-regulated.”

SNL’s token Asian cast member, Bowen Yang, was then brought on to remark on the supposed anti-Asian hate epidemic in American society. Yang provided a sarcastic admonition to the viewers saying they should do more for the Asian community. “There's a lot of work to do and I found some posts online with action items that everyone can take to help,” he said. He illustrated “Six Ways to Check in on Your AAPI Friends and Tell Them They're So Hot" and "Call your senators and demand that they know about the lesbian characters in Sailor Moon!" We won’t be doing any of those, Yang, thanks.