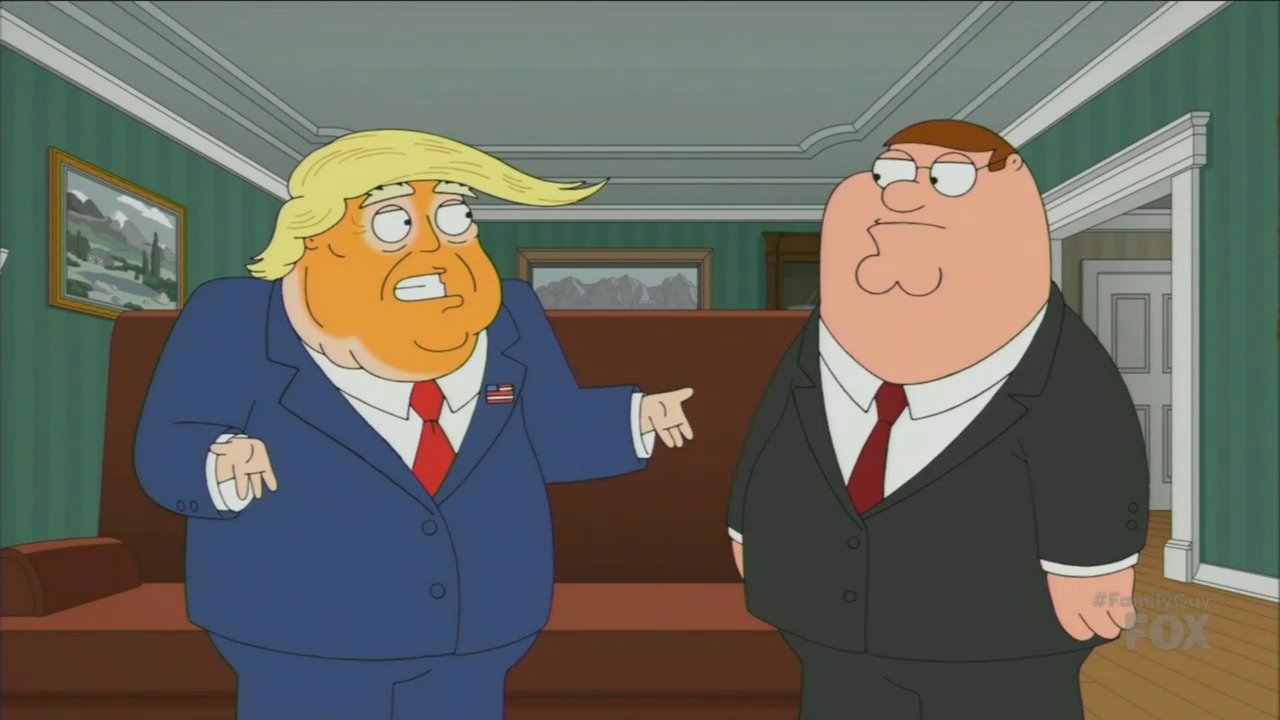 Family Guy proved it is possible to put so much anti-Trump hysteria into one half hour to the point where it hurts the final product in the 11th episode of the show’s 17th season on Sunday night, titled “Trump Guy.” In it, Peter Griffin works as a White House Press Secretary for President Donald Trump--and the show’s liberal agenda has never been more apparent, squeezing in as many jabs at him as possible.

Perhaps their feelings about the president were most clear during an angry exchange President Trump had with Peter. Peter was angry the president had made unwanted advances towards his daughter Meg on two occasions, including grabbing her genitalia in one encounter--referencing a crude joke he made 14 years ago. The show then uses this as an avenue to insult the president more.

Donald Trump: Anyway, my point is, if Peter Griffin gets to be a jerk all the time, then why can't Donald Trump?

Peter Griffin: Huh. That is not the... dumbest thing you've ever said.

Donald Trump: So are we square?

Peter Griffin: No. No, President Trump, we are not!

Peter Griffin: That's right. And you know what else? My days of being mean and insulting are over! From here on out, I'm gonna be the nice, kind Peter Griffin.

Donald Trump: You can't walk out on me. I'm the president.

Peter Griffin: Well, you're not a very good one.

The outlook of Trump throughout the entire episode was negative. In fact, it ended with, Peter saying, "From our family to yours, we're very frightened."

The episode almost had a propaganda feel to it. Although the writers are free to make whatever jokes they want, so many of the jokes felt forced and ultimately fell flat since they were all already based on left-wing talking points--many of which were strawmanning the right.

For example, they went after Trump’s personal life and his relationship with his eldest daughter Ivanka. She told Meg, “He's kind of like my boyfriend,” implying there’s some creepy incestuous relationship between the two of them. Plus, Melania offered Peter a golf club while he was in a fight with the president and offered sex if he killed him.

Speaking of lame left-wing talking points, one unnamed White House employee told the Griffins as soon as they moved to D.C., “We're all wiping our ass with the Constitution.” And in the next line, former Trump campaign adviser Roger Stone, who the show referred to as a “disgraced political oddity,” said, “I’ll take the fifth,” in reference to alcohol he was ordering. However, then Brian Griffin laughed and said, “That works on two levels,” because Stone used his Fifth Amendment rights when asked for a document during the Russia investigation.

Of course, there were references to Russia as well. While at a White House gathering, Peter speaks with a few Russian agents, one of whom asks him what his favorite nuclear missile code is and another who asks him for his Gmail login information. Towards the end of the episode, Trump also says, “Putin’s the best."

For all of the hype surrounding the episode, it really failed to deliver on any meaningful front. These are the kinds of jokes the left makes at every available turn and, despite having a full staff of writers, the show could not come up with any original thoughts. One could have predicted everything that was written into the episode before it happened.

After all, it is public record that the show’s creator, Seth MacFarlane, donated $2 million to the left-wing Senate Majority PAC prior to the 2018 midterm elections. Seeing how Democrats actually lost two Senate seats in that election, perhaps that money could have gone to better use hiring more writers. Maybe that way, the show could have actually produced something worthwhile instead of overdosing on their own Trump hatred.