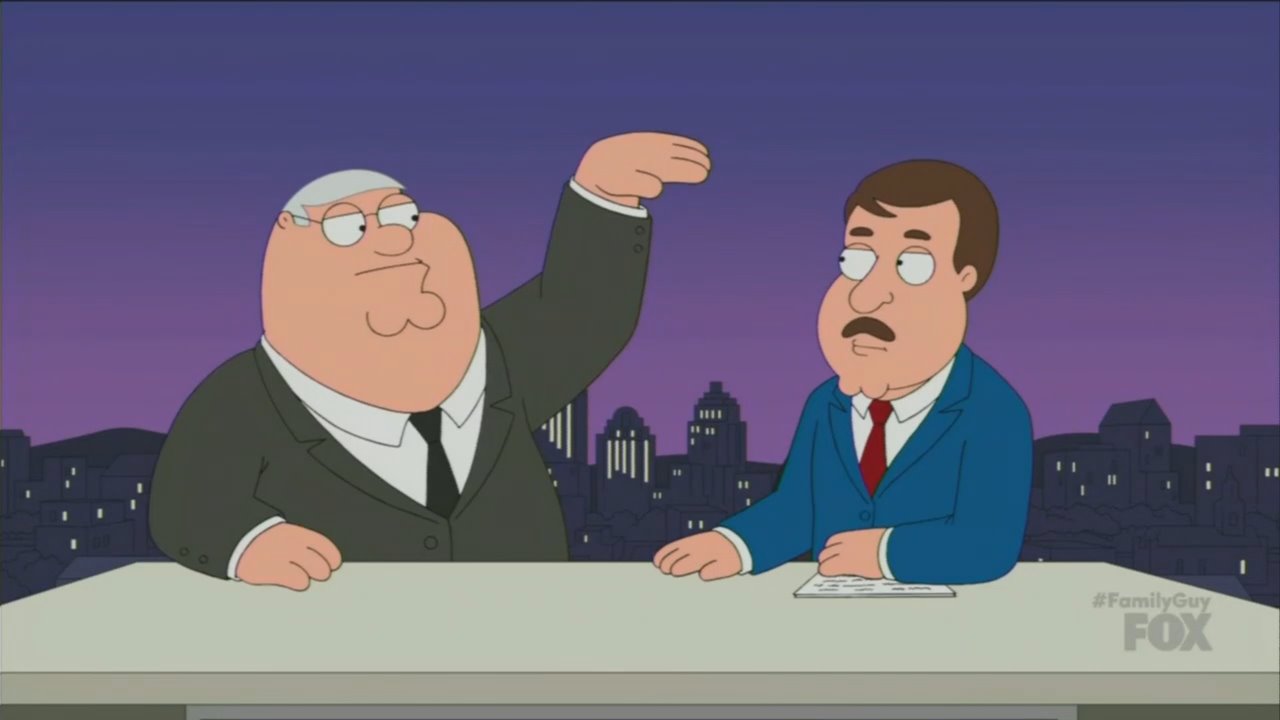 Peter Griffin gets locked in his basement by his friends Joe, Cleveland and Quagmire while looking for ghosts with them. When his wife Lois finds him the next morning, Peter’s night of being scared and stressed results in his hair turning white--and people trusting him because of his new hair color.

This trust turned into a on-air analyst job for him at Quahog 5 News where anchor Tom Tucker encourages him to spout off fake news in exchange for ratings. Tucker says to him, “People want to know that bad stuff’s going on out there.”

In response to this, Peter says in one of his rants, “Crime is way up, and you know why? 'Cause of immigrants. I say, as Americans, we should all take a pledge to kick 'em out.”

However, Lois is furious when she finds out what Peter is doing and urges him to stop. Just as soon as he agrees to do this, though, he is offered a job as President Donald Trump’s White House Press Secretary. Peter accepts the job, Lois rips his head off in anger and then “To be continued” flashes on the screen, referring to next Sunday’s much-anticipated episode called “Trump Guy.”

Lois: Well, I hope you're happy. You're telling lies on the news just to boost your own ego.

Peter: It's pronounced "Eggo," Lois, and I will thank you to leggo of mine.

Lois: Peter, fake news is a real problem in this country right now, and I really don't want my husband contributing to it.

Peter: Maybe you're right. It doesn't feel good lying all the time. I guess I just like all the attention with having white hair.

Peter: You know what? If it means that much to you, I'll tell Tom that I won't do it anymore.

Lois: Oh, Peter, that makes me so happy.

Peter: Hello? Donald Trump?! You saw me on the news? You want me to be your press secretary in the next episode? Why, sure, I'd love to! We'll get started drawing it right away. Lois, pack your bags. We're joining the Trump Administration. Just what Washington needs, huh? Another talking head.

Although there is an issue with fake news in the country today, to put it all on President Trump is completely unfair. It’s also an inaccurate straw man argument to say anyone in the United States wants to deport all immigrants and label them as criminals or that Trump would support such a person. Conservatives make it abundantly clear that they are pro-immigration, but want it done legally for safety purposes.

It’s also easy to dig up countless fake news stories from mainstream news outlets on the left like CNN, NBC, ABC, CBS, New York Times and Washington Post and yet, they somehow get a pass for their actions from Family Guy.

The show’s disdain for Trump and conservatives should not be all that surprising, however. In late December, the show’s leftist creator Seth MacFarlane called Fox News “incredibly destructive” and said that he was glad he never met the station’s creator Roger Ailes. Even so, he still continues to collect checks from the parent company for both Family Guy and The Orville which air on local Fox affiliates.

If MacFarlane is all that concerned about “fake news” and Fox News, maybe he could take a stand and leave the network that has enriched him so much instead of complaining and using one of his shows as a vehicle to bash the president with cartoon characters.