Family Guy took a predictably anti-gun stance in the fifth episode of the show’s 17th season on Sunday night, titled “Regarding Carter.”

Carter Pewterschmidt missed his daughter Lois Griffin’s birthday party and when he comes by to apologize, he brings a gift with him--a handgun. Needless to say, Lois does not exactly appreciate the unexpected gift and the show takes the opportunity to have her weigh in on the national gun debate.

Carter: It’s okay and here, I brought you a gift.

Lois: No, I don't. You don't know me at all. I can't believe you'd blow off my party, then give me a handgun. Especially when there's kids in the house.

Carter: Hall. Kids in the Hall.

Lois: Damn it, Daddy. I'm trying to explain that guns are hazardous and unsafe, not have a conversation about a tepid 1990s Canadian sketch group

Carter: You're wrong about guns and comedy. I'm out of here. Buh-bye

Lois ends up finding a temporary hiding place for the gun in the house before she can return it, but her husband Peter Griffin finds it and is a bit reckless with it. Just before Peter finds it, Brian proclaims he agrees with Lois’ decision to get rid of the gun, saying, "Guns are a major problem, especially in the hands of..." and then Peter can be heard firing the weapon. He shoots the family television and later points a gun at one of the hosts of The Voice who is not enjoying his son Chris’ singing. 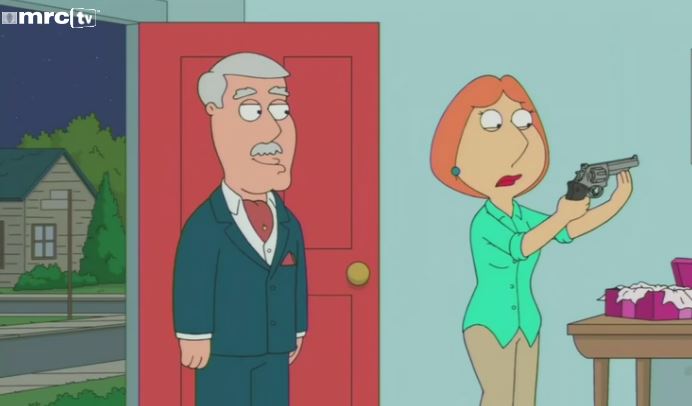 When Lois does try to return the gun to her father, he does not want to take it back and, while the two are pushing it back and forth, Lois accidentally shoots Carter and he ends up going to the hospital.

A major issue with the show’s depiction of firearms is that it tries to paint the weapons themselves as dangerous. An estimated 100 million Americans own guns (Pew puts the gun ownership rate at 30 percent), but accidental shooting deaths in the US just hit a record low since statistics started being kept in 1903, according to Fox News. Sure, damage can be done with a gun but in the hands of a responsible, law-abiding citizen, they are a positive for society and can save lives - guns are used for defense between 500,000 and 3.5 million times every year - and there is a reason why owning one is a protected constitutional right.

The "hazardous and unsafe" gun narrative seems to go along with the show creator’s political stance. Seth MacFarlane, a noted leftist, has made plenty of anti-gun statements in recent years. In 2016, he tweeted out data he believed made the case for government-mandated gun confiscation in the United States. He also tweeted following the Pulse Nightclub shooting that automatic weapons should be banned in the United States, apparently not knowing that is the current law.

If that is any indication, MacFarlane clearly isn’t all that well-informed when it comes to the gun debate, so perhaps his shows should stay away from it as well. If he himself isn’t familiar with the topic, then what good is his opinion being broadcasted to millions of others in cartoon form?