I keep forgetting that the word “woman” apparently means nothing these days. 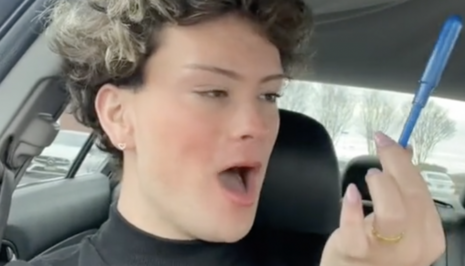 Grant Sikes, a 23-year-old male-to-female transgender student at the University of Alabama became popular over the summer when he decided to rush for a spot in a Bama sorority. He documented his journey on TikTok and gained millions of views and followers. But his latest video showed just how un-womanly he really is.

Grant hopped on a trend that another male-to-female transgender “influencer,” Dylan Mulvaney, started where they document each day of “girlhood.” They say thinks like “day 10 of being a girl and today …” You get the gist. On Wednesday he posted his day 12 video where he went to Target to purchase tampons and had no idea whatsoever how they worked … despite being a "female."

“Day 12 of being a girl and we’re gonna go buy tampons,” he began. Here’s where my jaw began to drop.

Then he got back in his car to show off his new purchase. “Ummmm … I think these are like little dots to see how much you flow is what somebody said online … I don’t know so let’s do an unboxing.”

Biological male who went viral this year for attempting to join a sorority is now learning from Dylan Mulvaney and creating tiktoks making a mockery of women. pic.twitter.com/CFUCgzg5Xb

His tone was not only annoying but also comes across as pretty b***hy. Maybe he is a girl after all.

He continued asking numerous questions to the camera like “that just hangs out inside you?” “how do you get it out?” “where does the string go?” etc.

Who’s gonna tell him that he’s never gonna need to use one of those bad boys?

Nonetheless, when another user commented “wait why do you need those?” Sikes replied “For me?” as if that was obvious.