When I have kids, I am going to keep them far, far away from Pennsylvania. 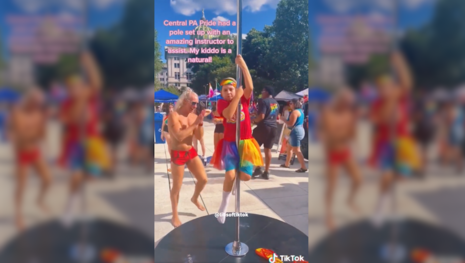 During a recent "Pride" festival, the gays of Central PA set up a pole in the middle of a highly trafficked pedestrian area and assisted a child onto it, according to LibsofTikTok.

Brace yourself for this one.

A pride event in PA featured a stripper pole where they taught kids how to pole dance pic.twitter.com/IRBE07lp3q

The newest lesson in Trade School is apparently how to spread-eagle on a metal pole. How tasteful.

Now, let’s look at the definition of the word “groomer.” According to the National Society for the Prevention of Cruelty to Children, “Grooming is when someone builds a relationship, trust and emotional connection with a child or young person so they can manipulate, exploit and abuse them.” No one in their right mind - or their left one - can look at this video of a nearly naked man teaching a child where to position his legs to climb up a pole easier and think this doesn't meet that definition.

LibsofTikTok also tweeted a letter from PA Governor Tom Wolf, who expressed his enthusiasm and support for events like this.

The Governor of Pennsylvania put out a letter in support of this pride event. @GovernorTomWolf do you condone these actions? pic.twitter.com/XIpxdRAqD4

Pride Festival of Central Pennsylvania is a time to unite and denounce discrimination and violence toward LGBTW+ individuals, to promote self-affirmation, dignity, and equality, and to mobilize communities. For thirty years, the Pride Festival of Central Pennsylvania has been challenging oppressive norms, uniting the community in hope and solidarity. I am confident this example of conviction, compassion, and camaraderie will inspire others for many years to come.

As Governor, and on behalf of all the citizens of the Commonwealth of Pennsylvania, I am honored to offer my support for Pride Festival of Central Pennsylvania’s thirteenth anniversary.

Let’s pull out some key words: “dignity,” “camaraderie,” and “uniting.” These words are the OPPOSITE of this little scene put on at the festival. Will Wolf condemn the actions of this child groomer? Time will tell, but I doubt it.

LibsofTikTok added that the original video has since been deleted from TikTok, and I bet the media won't even pick it up.

Twitter is censoring the term 'groomer' when it's used to label someone who indoctrinates small children with sexual topics.

So, @RealBrittHughes has a better term for these weirdos in the latest episode of The Brittany Hughes Show. pic.twitter.com/M4iMSWN6T1