It’s not everyday that we see democrats who are against abortion. 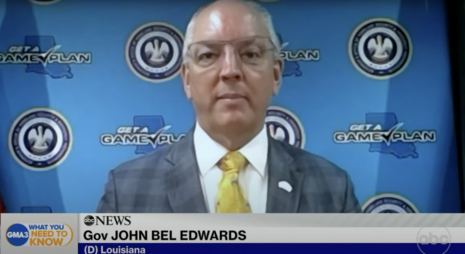 Democratic Louisiana Governor John Bel Edwards signed two abortion bills into law on Tuesday. These bills would effectively ban abortions in the state as well as criminalize people who provide the abortion procedures.

Edwards’ decision comes at a monumental time in history where the U.S. Supreme Court is likely to overturn the 50 year Roe v. Wade ruling and push abortion rules and regulations back to the states. This decision is expected before the end of the month.

“My position on abortion has been unwavering. I am pro-life and have never hidden from that fact. This does not belie my belief that there should be an exception to the prohibition on abortion for victims of rape and incest,” Edwards tweeted. Edwards represents the Democratic Party but also claims to be pro-life, a rare combination.

It is the intention of the Legislature of Louisiana to prohibit and restrict abortion and to thereby preserve the life of each unborn child to the fullest extent permitted by law.

That bill also indicated that if providers are caught giving illegal abortions they will face prison terms of up to ten years and be fined up to $100,000 as ABC news pointed out.

The bill also indicated that if a pregnant woman is harmed or killed as a result of an abortion-inducing drug, the provider will be charged in similar fashion.

Though these bills are major wins in the fight for life, many lefties are not happy.

Roe v. Wade is in imminent danger, and yet my home state is still passing restrictions on reproductive rights and health care providers.

This is terrible news for healthcare and personal freedom in Louisiana. https://t.co/gBUMXgI845

“Terrible news” for this male congressman whose never going to need an abortion anyways.

i will violate this law and send abortion pills to louisiana. good luck arresting me in california mf.

Yes, from a psycho leftie with demon eyes. And let's look at one more from Planned Parenthood employee Katie Smith.

It's also important to point out that Louisiana has the second to worst maternal mortality rate in the U.S., and the U.S. is already the worst of the developed world.

But instead of addressing that, lawmakers want to spend their time and resources putting doctors in jail.

It’s quite cray cray to see the disapproval of laws that aim to protect innocent babies. Kudos to Gov. Edwards who broke the demonic trend of Democrats who typically advocate for abortion.