Late Late to The Truth of Abortion: Corden 'Gobsmacked' by Draft Ruling

It’s no surprise that James Corden is leaving The Late Late Show after this 2022-23 season. The talk show has drifted from mere talking to now pushing leftist propaganda in a theatrical fashion. 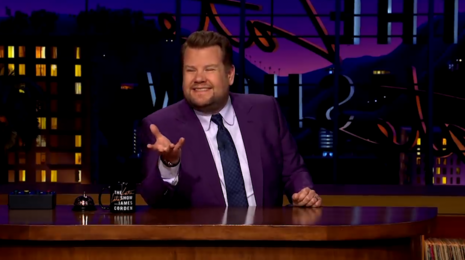 In a May 3 episode, Corden shared his thoughts (such as they are) on the leaked Supreme Court draft of Roe V. Wade. It was a sorrowful lament. He even forced his eyes to well up. Mad skills bro.

Using a pattern of dramatic pauses and ample um’s, Corden generalized, “I think every single one of us was gobsmacked and shocked when we read this.” He’s right about that and only that. This leak was a monumental moment in history. As far as anyone can tell, this is the first time that a draft has been prematurely released from the most supreme court. The draft opinion, reportedly written by Justice Samuel Alito, wasn’t set to be released until this summer.

Even so, it's been widely assumed that the verdict would effectively overturn Roe since SCOTUS took the Mississippi case. Corden must have been paying as much attention to the news as the public does to his show.

The rest of the segment was based on lies.

Corden’s most notable lie was that this is the “biggest rollback of human rights in modern U.S. history.” Because affirming a child’s right to life is now apparently a “rollback.”

In the clip Corden added, “In the UK where I grew up, abortion has been safe and legal for many many years. We have a healthcare system that takes care of women and their children for free.” Corden failed to address the fact that abortion is never safe. Even if the procedure is done in a clean clinic with sterile instruments and trained doctors, every successful abortion kills an innocent child. That is not safe. That should not be legal. And that is definitely not “healthcare” nor a “reproductive right,” as Corden later referenced.

Corden brought up the pushback of government control regarding masking and vaccinations to claim that “some of the most vocal opponents” are now saying “your body, my choice.” Sir, whoever wrote your script needs to be fired. What’s really happening with an abortion is a mother, doctor, or whomever is responsible for the decision to terminate the pregnancy, is saying “dear little innocent baby, this is your body and I am choosing to end it.”

“This news is stunning, and sad and terrifying,” Corden said. How sad it must be that a step to end the slaughter of the unborn has been taken. So sorry you might not be able to kill babies anymore. Boo hoo!

Corden ended the 3 minute too long segment proclaiming his solidarity with women who wish to kill their babies and pleaded to the Justices to reconsider the “overthrow of human rights.”

Let me be the first to say. I can’t wait til Summer 2023 when Corden is back in the UK and off of The Late Late Show.