“Toddler to trainwreck” is far too common a story for child actors-turned-adults in Hollywood. Another young actress is telling hers. 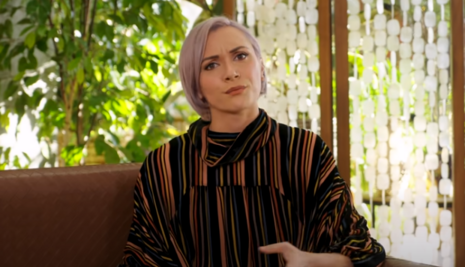 In a raw op-ed for People, coupled with a YouTube video, actress Alyson Stoner offered her own “toddler-to-trainwreck pipeline” narrative. Stoner is commonly known from her lead roles in “Cheaper by the Dozen,” the “Camp Rock” movies and as a lead voice in the Phineas and Ferb animated series. She started in the industry at age six. Now, at 27, she related the child actor trauma she faced which is yet another example of the disgusting effects of the industry on children.

Stoner painted the picture of one of her earliest audition days where she went directly from trying out for a role as a child who was kidnapped and raped to another as a happy princess. “On the spot, I manually alter my mood, personality and outfit so I can win over a new stranger with a camcorder. I need to outperform 900 other candidates. Suddenly, I'm ‘Smiling Girl #437.’”

She’d have to act vulnerable to complete strangers and could never grasp what was real versus imaginary. “My nervous system is imprinting patterns that will unconsciously dictate my behavior personally, socially and professionally for decades to come,” she confessed.

She continued to explain the battles she faced and still has the scars from. She didn’t grow up “normal,” “stable, or “alive,” she said. She was a working machine since childhood, she was part of “inappropriate and hazardous” work conditions, was “medically undernourished and chronically stressed,” and had a spotty education at best. At 17, Stoner admitted herself to a hospital once for being 20 pounds underweight and her team still sent her on countless auditions. Where was her mother? Though the clear solution is to quit the big stage, Stoner never mentioned any attempt from her mother to stop the evident trauma. And no interference from your guardian is the same as encouraging her to stay.

The industry isn’t invested in the lives of the child, they're only interested in producing an on time and in-budget product. But this is nothing new. Look at all the drama with Brittney Spears, Demi Lovato or Mara Wilson who is “Still living with scars” of being a child star. The industry has the potential to ruin the lives of these kids for entertainment through “rapid adultification” but parents do have the power to pull them out whenever necessary, they just don’t.

Luckily, even though Stoner faced sexual harassment, stolen IP and money, the paparazzi’s, emotional numbness, and the truth of what happened on set, Stoner still believed she’s “one of the most fortunate cases.” Though all the harm was censored behind the scenes, Stoner and all of these child stars are living examples of the terrors of the industry for children.

“For the folks who click on Where Are They Now articles, I am here. We are here.”

Stoner offered solutions to emphasize that there is not a total loss of hope. She encouraged the inclusion of therapy and counseling for child stars and their parents for long-term trauma prevention, accountability from studios and agencies, interventions and people to advocate for these child stars as she admitted she was the “only advocate” for herself.

A clearer solution would be for parents to not put their kids in these positions in the first place but who’s going to listen to that when fame and money is on the table.